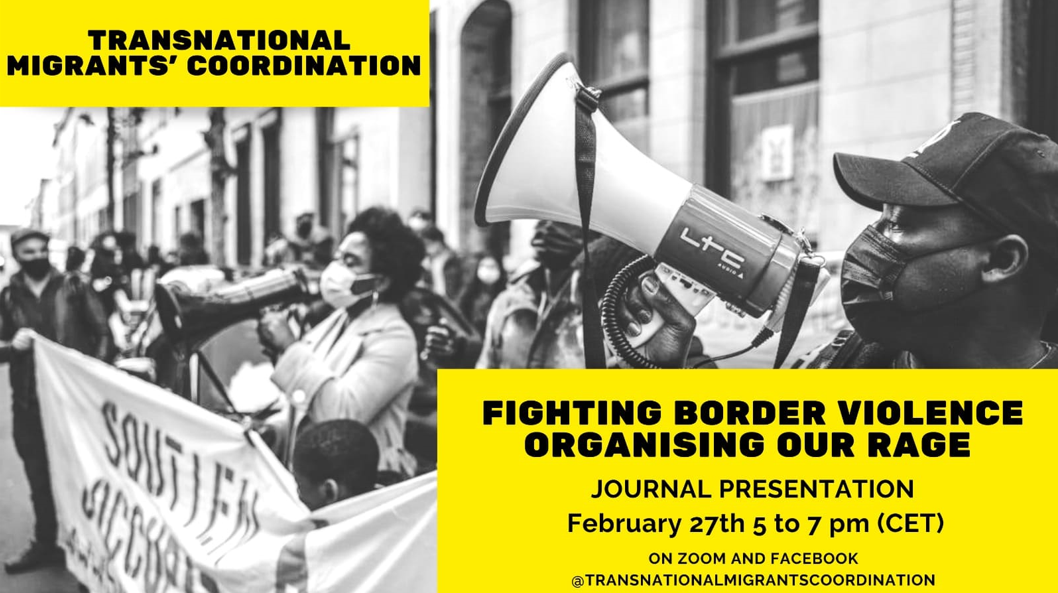 On February 27th the Transnational Migrants’ Coordination (TMC) organises an open discussion on Migrants’ struggles in transnational Europe. Our starting point will be the Journal Migrants’ Struggles published in December 2021.

Participation is open to individuals and collectives that share the goal of fighting border violence, institutional racism and patriarchy.

The journal edited by the Transnational Migrants Coordination collects contributions from Slovenia, France, Italy, Spain, Greece, Bosnia and Turkey, discussing struggles around mobility and freedom of movement in different regions and countries that are integrated in the European border regimes. The events after the publication of the journal proof the urgency to publicly discuss its outcomes and the possibility of common strategies and demands to connect the many practices of struggle and resistance enacted by migrants, and to bridge feminist and antiracist movements.

As we wrote reporting the recent demonstrations held in different countries (including Turkey, Greece and France) after the death of migrants along the Turkey-Greece border, there is a common logic linking together what happens at the border and how migrants are treated within the States. During this past year, walls have been built in Greece and Turkey on the pretext of an invasion by Afghan migrants, and the borders between Poland and Belarus have been completely militarised, pushing back migrants with violence or leaving them to die in the cold. Violences and pushback continue also at the borders between Marocco, Algeria and Lybia. Border violence, pushbacks, and exploitation in the European countries (especially in the Schengen Zone) of arrival are possible because of the blackmail of the residence permit which is regulated by different EU agreements and national laws. The residence permit impacts the life of migrants in Europe by imposing on them unbearable working and living conditions, because it links migrants’ right to stay in Europe to job contracts, specific wage and income levels, proof of suitability of accommodation and often to the residence permit of husbands and fathers, even if violent. These requisites create further hierarchies among migrants, women and men, and between migrants and non-migrants.

As long as the residence permit regime lasts, on the one hand, there will be migrants who will need to work under whatever condition in order to renew their residence, and, on the other hand, there will be migrants who will risk their life and lose it to reach the EU or Schengen Zone. It it with this political reality in mind that as TMC we claim freedom of movement, and unconditional European residence permit for all, independent from job contract, income, wage, and family reunification as a tool to connect migrants’ struggles and conditions.

Recognizing the centrality of migrant women’s struggles for feminism, in this event we will also discuss how to approach the upcoming global women’s strike of March 8th. From the very beginning, TMC took part to the strike and demonstrations of March 8th, and feminist movements have acknowledged that a feminist struggle must be also an anti-racist struggle. Therefore, our meeting will be also an occasion to discuss how to strengthen this political connection between migrants and feminist movements.

Below you can read the introductory text of the journal:

Migrants struggles and the goal to strengthen our collective force

This journal collects contributions from migrants and activists involved in struggles around mobility and freedom of movement in different regions and countries that are integrated in the European border regime. The texts describe and discuss the situation in Greece and the Aegean, the Turkey-EU relations, the role of wars in displacing Kurdish people, struggles and violence along the Balkan Route, the dynamics and protagonists of the newly formed Belarusian route, anti-immigrant policies and forms of struggle in Spain, the conditions of migrant labor and asylum seekers’ struggles in Italy and the undocumented movement that for years now is organising in France. The pandemic has impacted on migrants’ life in different ways and containment measures have also impacted on border crossings, providing an argument for strengthening controls and arbitrariness against migrants. However, migrants’ movements have not stopped and the articles included in this journal illustrate a terrain of confrontation and struggles that is as fragmented as crisscrossed by common dynamics. The aim of this journal is thus that of raising the question of how to grasp the connections between the different elements that compose this picture. What is the link between migrants stranded in a Belarusian forest and those demonstrating in the streets of Paris? What is the link between asylum seekers blocked in Greece and those struggling against exploitation in a logistics center in Italy? What is the relation between men and women, amid worsening winter weather, trying to reach the EU through the Balkans and migrants resisting institutional racism in Spain? We think two elements must be considered: first, all these situations happen in countries or regions that are directly involved in the EU’ and its member states’ attempt to regulate and govern mobility by deciding who can enter the EU. Second, in all these situations migrants are not mere objects of this attempt, but are on the contrary the subjects of a transnational movement that fights for its freedom to move across the borders and to seek a better life, free from violence, threats and exploitation.

As for the first element, discussing the connections between the situation at the EU borders and  migrants’ conditions in the different member states allows to understand how border and migration policies are not just aimed at keeping out unwanted migrants, but are tools to determine under which conditions migrants live within and outside Europe. The violence at the border is the mirror of the violence of exploitation within workplaces and vice versa: on the one hand, migrant workers are blackmailed by institutional racism and the link between visas and labor that constitute a common feature of migration policies in all countries; on the other hand, migrants at the border are treated with inhuman violence because they are considered as disposable workforce without rights. At the same time, the involvement of countries such as Turkey, Morocco or Libya shows how the European border regime is now integrated in a wider attempt to limit migrants’ autonomy and possibility to move. However, the second element clearly present in these articles, that of migrants’ struggles, shows that migrants are challenging this system in all its manifestations: the issue at stake is how to articulate coordinated political discourses and initiatives that are up to this challenge. In order to do so, we need to reverse some common assumptions regarding migrants and migration: the contribution discussing the Belarus-EU situation and that from Italy are both relevant in this regard. The first discusses the self-organisation of refugees that in very high numbers are trying to reach Belarus in the attempt to get closer to the EU borders, thus questioning any identification of migrants stranded at the border as mere victims of geopolitical games. The second shows how, besides the limit of the reception systems for refugees, asylum seekers are today part of a transnational labor force and often leading important struggles inside the workplaces. On the other hand, the contributions from the Balkans, France and Spain show the different forms of solidarity and struggle: in the Balkans activists and migrants organise together to keep alive the route towards Europe; in France and Spain, besides local mobilizations, national coordinations of migrants’ struggles brought thousands of people in the streets, and clash not only with the daily institutional racism, but also with the advance of the right or the silence of the government.

Overall, this journal describes a clash on mobility that sees migrants fighting the different forms of institutional racism and border violence which are pillars of the attempt to stem and govern migration within and around Europe. It also describes struggles enacted by migrants in different contexts. We think that these struggles must be supported: from activism at the border to solidarity groups, everything that can sustain migrants’ in their daily efforts must be continued. However, we think that something more is needed: we need to strengthen our capacity to act together and to push forward collective demands which are capable to enlarge and reinforce migrants’ struggles collectively beyond the specificity of a single struggle. We need to make migrants’ demands heard in every struggle, as the one fought by women and LGBTQI people fighting against male violence. For several months now we are claiming a European residence permit without conditions for all migrants. But we think that to achieve these common goals we need to strengthen our transnational communication and to elaborate common views. As TMC we will keep pursuing this objective and promote transnational assemblies to discuss together. 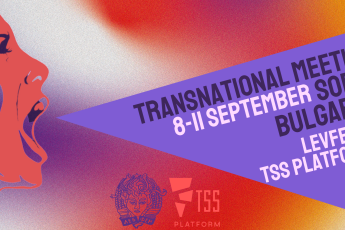