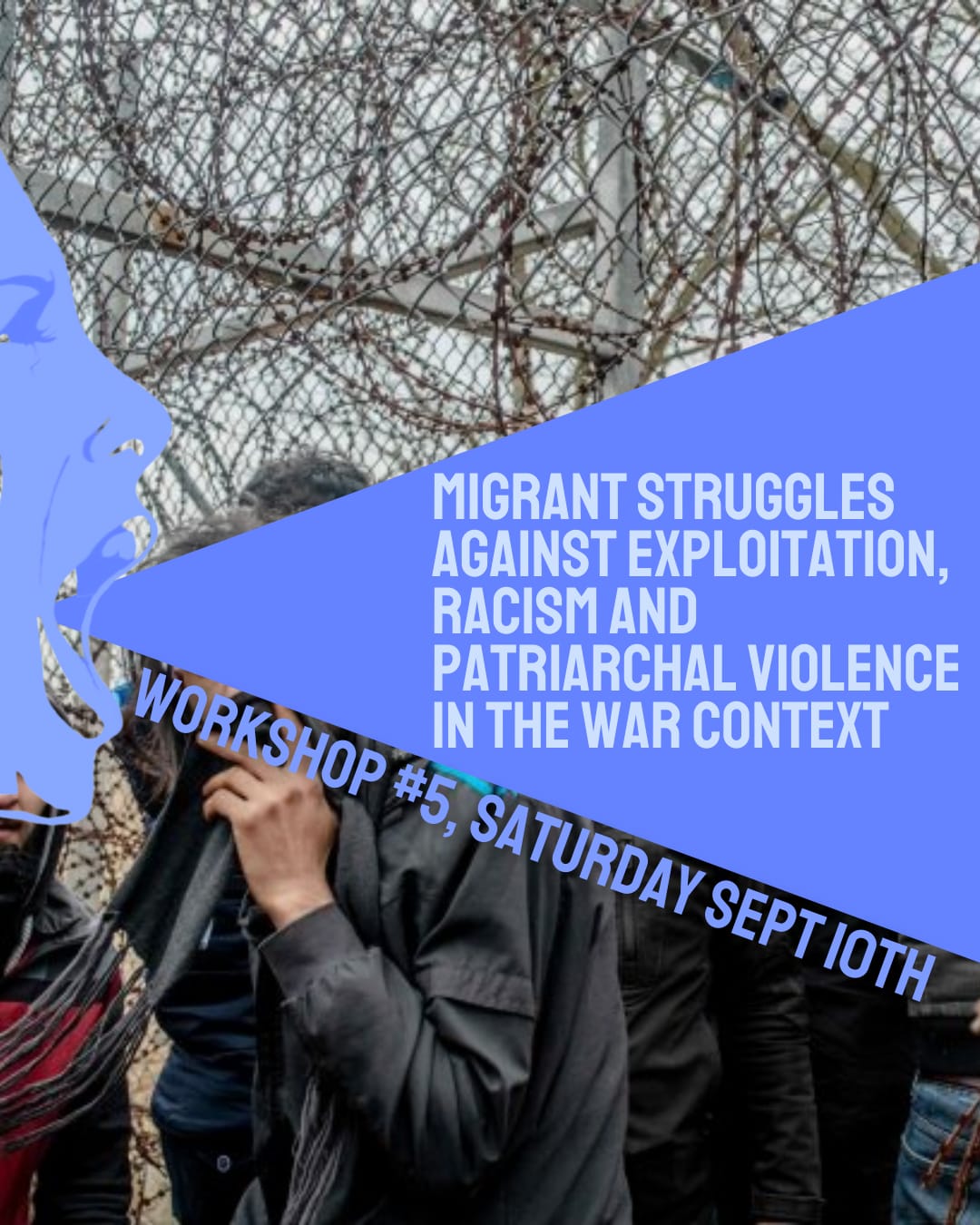 Report of the Workshop organized by the Transnational Migrants Coordination

During the workshop on migrants’ struggles, first, we discussed about the ongoing changes in European policies related to migrants’ mobility and labor, borders regimes, and institutional racism. Second, we shared the experiences and the strategies deployed by migrants and anti-racist movements that refuse these conditions every day. The aim of the discussion was to better organize together, and to push forward our transnational political initiative.

The discussion highlighted all the different aspects of the European and non-European migration regime and how important is to start thinking together about differences and connections that can shape our struggles on a transnational scale. Our comrades from Greece showed how in the camps in Lesbos or in Eleonas migrants are forced to live in poor conditions, waiting for years for their documents, sometimes being threatened and forced to obey any request. Women are often raped or forced to sell their body in order to have some money. Migrants often lose their life in the camps because of the lack of medical assistance. By locking up migrants for years in the camps, this whole system forces them to work, and accept the evilest conditions of exploitation and violence.

Although the militarization of borders, the walls, the violence and push-backs seem to produce a “fortress-Europe”, we know that this “fortress” it actually opens the doors when there is a need for cheap labor. In fact, when migrants finally manage to cross borders, they are exploited in poorly paid jobs: in factories, the logistics, care work, or in the so-called “essential sectors” (especially migrant women), under the blackmail of their residence permit. That is why migrants in France are striking against both exploitation and racism, in order to obtain both better working conditions and documents. The situation on the borders and the situation inside the big cities cannot be treated separately. The brutal violence on the borders between Poland and Belarus, as well as the violent push-backs and deaths in forests or at sea, get people used to consider migrants’ lives as lives that worth less and, therefore, as labor that is worth less and can be paid less.

War is worsening border violence and greatly affecting migrant flows. Militarization and investments in the war industry reinforce the racist border regime. Since the beginning of the war, more than 9 million Ukrainians have fled their country, seeking refuge in Europe that, suddenly, put on the mask of solidarity and integration. Actually, old racist differences and hierarchies have been reproduced, among those fleeing the war, based on the color of the skin and nationality. For Ukrainian refugee women, the EU has provided measures hitherto firmly denied for all other migrants. However, everywhere there are huge delays in issuing documents, the economic aid received from the States is risible, and the easiest thing Ukrainian women can do is to be employed in the service sector, cleaning or in the care sector, regardless of their job-skills.

However, European hypocrisy does not stop here. In order to buy gas or grain, Europe makes deals with countries, such as Turkey, that does not undersign the Istanbul Convention against Violence on Women. The very same Turkey that exploits migrant women in factories or in domestic work, and does the dirty work for Europe by detaining between five and seven million migrants.

The complexity of the different situations obliges us not to deny these differences, but to try to bridge these divisions and hierarchies and fight together. Despite the militarization of borders, despite institutional racism and violence, millions of migrants continue to risk their lives to improve their conditions, and to gain their freedom. What we need to do, then, is to support this autonomous movement of migrants and work on the conditions that, on a transnational scale, allow freedom of movement, and freedom from violence and exploitation. We need to continue the discussion that we had here and to continue to connect our struggles. The great challenge is to find common battlefield, i.e. a common claim that can mobilize us together and give us more strength.