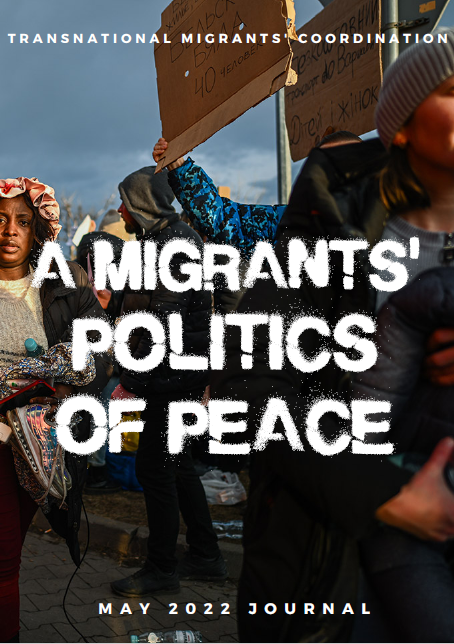 Since Russia invaded Ukraine, the war has been having devastating effects not only in Ukraine, where thousands of men and women are daily killed, tortured, executed or raped, but on living and working conditions on a global scale. A new transnational order is being redefined, and the governance of migration is a fundamental core of the ongoing transformations. Since the beginning of the war, more than 6 million Ukrainians have fled their country, seeking refuge in a Europe that has suddenly dressed in the guise of solidarity and integration. As migrants, however, we cannot forget the vicious policies of refoulement implemented by the European Union, the costly investments in the militarisation of the borders, the racist hierarchies and the constant division between refugees and asylum seekers, the pacts, initiated or reinforced in the last two years, with third countries to keep migrants out of Europe. Since the outbreak of the war as Transnational Migrants Coordination we have demanded open borders for anyone seeking safety and freedom of movement and for all those who refuse to enlist in this bloody war. Instead, racist differences and hierarchies were immediately created between those fleeing the war on the basis of skin color and nationality. Between those who arrived in EU countries from Ukraine and those who arrived from Asia or Africa. This journal collects articles from migrant collectives and activists from Greece, Slovenia, the Balkans and Italy. It clearly shows not only that the same hierarchical and racist logics are being reproduced in each of these countries, but also that only a common and transnational stance against the war and the racism it intensifies can enable us to smash the divisions created by migration policies during the war.

As all the contributions point out, after refugees from war zones such as Afghanistan, Yemen, Syria or Iraq had for years been entrusted to third countries considered safe, the European Union has for the first time taken a series of measures to allow Ukrainians to enter and be integrated into its member states. For Ukrainian refugee women, the EU has provided temporary residence permits, facilitations in obtaining housing, employment, integration in schools and health services: measures hitherto firmly denied for all other migrants. However, everywhere there are huge delays in issuing documents, the economic aid received individually is derisory, and in Poland as in Italy, in France as in Spain, Ukrainian refugee women are employed, as soon as possible, in the service sector, in the factories or in the care sector. The generous European reception thus turns out to be the gateway to exploit  cheap female labour. All four articles strongly denounce the two-tier reception regime that was created with the outbreak of the war: while exceptions are allowed for Ukrainians and partial opportunities are created, for the rest of the migrants, rejections continue to increase, the brutal exploitation of those without permits remains unchanged, and conditions in reception centres remain unlivable. In Bosnia, migrants are moved to isolated reception centres, far from cities and villages, and out of the media’s control. Poland, which has so far taken in two and a half million Ukrainians, continues to reject migrants from the east who try to enter from Belarus, carrying out an order to reject ‘absolutely all (non-Ukrainians)’. In France, Macron announces a prolongation of his policy of selecting migrants according to the needs of the labour market; in Greece, as in Slovenia, violent pushbacks are a daily reality, while reception homes are shut down and the conditions for obtaining a residence permit become more and more complicated. While the West continues to sanction Russia, everywhere access to food and basic goods, housing, and clothing becomes increasingly hard due to inflation, which migrants are the first to suffer.

As the articles show, however, the migrants are not passive pawns. On the first of May in many cities we took to the streets with a powerful slogan,  Strike the war!, to express together our rejection of the oppression, patriarchal and racist violence and exploitation that the war is intensifying everywhere. These contributions clearly unveil the transnational dimension of the war and its effects. With these articles we want to amplify and enlarge the political communication we are building across the borders to fight together against institutional racism and patriarchal oppression exacerbated by war. We are convinced of the need for a transnational politics of peace expressed by the Permanent Assembly Against the War of the Transnational Social Strike Platform, which allows us to fight together so that the massacre is stopped, as well as the crisis that hangs over the lives of migrants, workers, women and men who struggle every day for a better life.