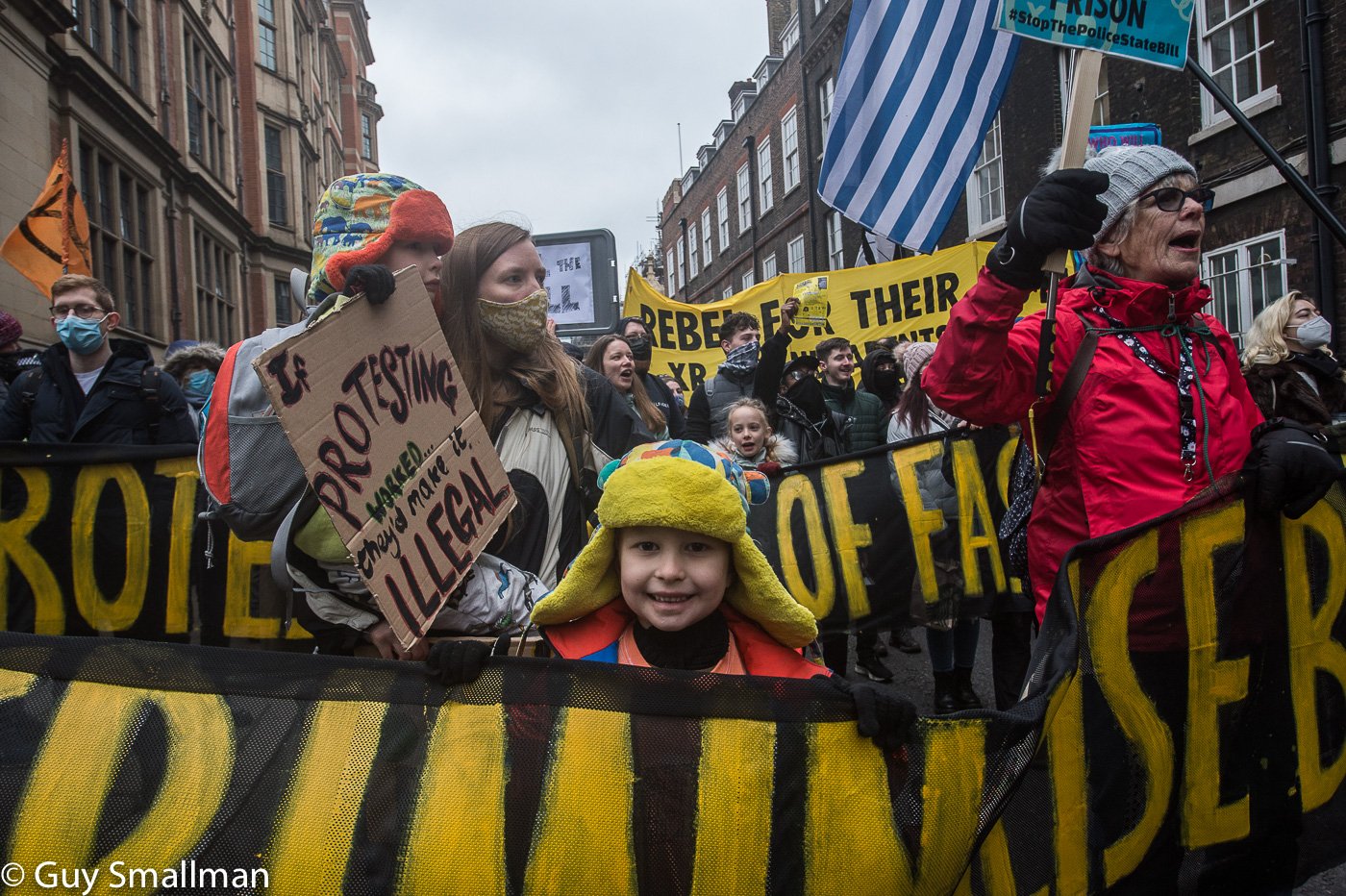 On Saturday, January 15th, thousands of people demonstrated in dozens of towns and cities across England against the new Police and Criminal Sentencing Bill colloquially known as The Police Crackdown Bill. The Bill is in its final stages of debate in the British Parliament and has come primarily in reaction to the last few years of mobilisation that has seen mass direct action including blockading of major infrastructures and occupying of land.

Not only have these mobilisations, from Black Lives Matter to Extinction Rebellion (XR), been effective in mobilising large numbers, they also have been on issues that much of society empathise with and have been elevated to culturally significant moments. They have also built a consensus around the need to act and to take action on issues like structural racism and climate change, which has led to a consolidated opposition not only against the current Conservative government but the entire system.

The Bill is specific in its response and is designed to criminalise the forms of protests that have occurred, like the toppling of the statue of the slave trader Edward Colston in Bristol that recently saw four defendants found not guilty to the outrage of the government. There are also new punishments for “locking on” to block roads which will see protestors face up to 51 weeks in prison. The Gypsy, Roma and Traveller (GRT) community, long stigmatised and discriminated against will be faced with Police able to seize their vehicles (homes) for occupying land to live on. Much of the initial opposition to the bill has been from the GRT community who have called protests and days of action, involving many squatter collectives and autonomous people living in vehicles. The expanding power of the police in deciding when to prevent and disperse protests seen as too noisy or disruptive, which has previously been possible in certain conditions and with a senior police officer only able to invoke the order, means that lower-ranking cops can make the call, itself making such powers open to arbitrary interpretation and abuse.

Other changes made by the Lords will go back to MPs in a few weeks to vote again. The amendments which were rejected were: an offence of ‘locking on’, the offence of obstructing transport infrastructure projects, suspicionless Stop and Search, protest banning orders on individuals, prison sentences for obstructing the highway (amended to only ‘strategic routes’ e.g. really big roads). It is still a bad piece of legislation and will affect not just protesters but the GRT community. But the wins in the Lords last week are vital for all of us. We wait for the Bill now to be passed back to the House of Commons for a final vote in the next few weeks.

War is being waged on idealogical battlefields

Since the last general election in 2019 and the defeat of the Corbyn led Labour Party, the ideological battle had already been raised very publically between capitalism and socialism, politicising both sides of the debate and polarising the electorate into various political constituencies. The electoral victory of the Conservatives, on the back of the Brexit negotiations and the division within the Labour Party that sort to undermine it’s socialist and social democratic leadership, gave impetus to the right-wing hawkish factions in the government to go on the ideological warpath. As we have seen in more spectacular fashion elsewhere in the world when the left loses electorally, the right wins big and they do not wait to use their power to punish and further attack the Left and their infrastructure whilst in power. The electoral victory of the Conservatives in the so-called “Red Wall” of historically Labour Party constituencies for the first time ever was a defining blow to Labour’s base and the former industrial heartlands much if its history was built upon.

With the increasingly corrupt Conservative government overseeing the handing over of hundreds of billions of pounds of public money during the Covid-19 Pandemic towards the private sector – many of which have been Conservative Party donors and supporters – the context of the growing authoritarianism we have been witnessing is to further protect the system of personal privileges of the rich and powerful to continue business as usual uninterrupted. The contempt shown generally to the rest of the population is staggering in light of the “party gate” scandal which is unfolding (where Number 10 staff including Prime Minister Johnson held up to 17 illegal parties during lockdown). This is all building up towards a renewed consensus amongst many in the UK about the spectacle of parliamentary politics and “democracy”, the rule of privileged elites and the role of sections of the media to provide cover for it.

And it gets worse…

In conjunction with the Police Crackdown Bill, there are a whole array of nasty right-wing bills being currently being debated and voted on in Parliament. These include the Nationality and Borders Bill. Stiffening Britain’s already hawkish immigration policy, it seeks to criminalize asylum seekers who take unsanctioned routes: Refugees who arrive by boat, for example, could face up to four years in prison, regardless of the validity of their claim for safe haven. And if claimants escape traditional jail, they would be kept in concentration camp-style housing and offshore processing centers, sites long denounced by human rights activists. The Elections Bill, which — alongside potentially disenfranchising millions through the introduction of mandatory voter ID — aims to furnish the government with new powers over the independent elections regulator, sealing up the political process. The Judicial Review and Courts Bill, which would enable Mr. Johnson and his ministers to overrule judicial review findings that challenge their agenda. The Online Safety Bill, ostensibly designed to regulate Big Tech, is yet to be introduced to Parliament. But many free-speech advocates fear that it could be used to silence critics on social media, censoring those reporting details Mr. Johnson’s government would rather keep from public view. No more pesky judges or overly inquisitive journalists interfering with government business.

Kill one, two, many Bills

These bills comes at a time when many millions are anxious for their future – from climate change to high rents, low wages and rising inflation and has seen over the last few years that many are prepared to fill the democratic deficiency that exists within society by taking direct action in their interests. The movements that have come together to fight the Bill have vowed to push ahead and non-comply with it when the bill’s inevitably becomes law, however the level of resistance so far has been prone to fragmentation, sectarianism, NGO-isation of movements and a rise of new layer of activist social influencers dependent on social media to engage (or not) the wider public. Most people have not heard of these new bills let alone their consequences, so a renewed effort to educate, explain and build wider social alliances are needed in the coming weeks and months.