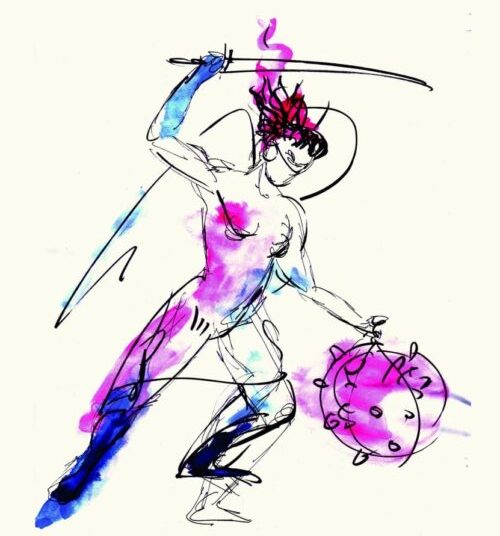 We publish the introduction to the English version (for the Bulgarian see here) of a journal collecting articles of activists who animated the network E.A.S.T. (Essential Autonomous Struggles Transnational) reflecting on new challenges around social reproduction in pandemic and post-pandemic times. To download the whole journal please click on this link.

The Covid-19 pandemic revealed, more than anything, the deep interconnectedness and mutual dependencies that exist more generally between different countries in Europe and beyond, and between different economic sectors but particularly between production and social reproduction. It showed that in order to maintain and reproduce our lives and society, some of the members of this society, especially women and migrants, Roma, and LGBTQI+ people, have long been expected to willingly sacrifice themselves. It was them again who fell under the capitalist imperative to put their lives “on the frontlines” against the pandemic. The so-called essential workers — nurses, teachers, care workers, cleaners, logistic workers, grocery store workers, seasonal workers —  were to ‘naturally’ fill the abyss in social protection gazing at us from the ruins of ever more fragile welfare systems. It was them who had to bear tremendous increases in workload in order to reconcile multiple shifts of working at home and outside, while being left without sufficient state aid and support. At the same time, with schools and kindergartens closed, it was mostly women who were forced to take the burden of the unpaid childcare work at home, while also performing their paid employment. Others even lost their jobs because of their increased childcare responsibilities. And while we were told to “stay home and stay safe”, it was rarely mentioned that the home is not a safe space for those who struggle against domestic violence, or for those who live in overcrowded places with poor sanitary conditions, or for those who do not even have a home.

It was also in this pandemic context, however, that women, LGBTQI+ people, migrants and essential workers in Eastern and Central Europe, not unlike many others around the globe, decisively refused to accept the tightening of capitalist, patriarchal and racist regimes that exploit their reproductive and productive force while leaving them in the lurch. An increased number of struggles took place within the region. In Bulgaria nurses went on continuous protests for a reform in the public health sector and for better pay and working conditions. In Poland the strike of women against the abortion ban inspired women across the world. In Romania activists protested against the governmental ban on gender studies and continued an ongoing struggles for better housing conditions – a problem especially acute within the Roma community. The Serbian anti-corruption and anti-governmental protests converged with the struggles in the country against indebtedness and for safe housing for all. The migrant struggles erupted in Turkey, Greece and along the Balkan route, in parallel to the struggles of East Central European seasonal workers in Germany and Italy against their terrible living conditions and exploitation.  All these struggles pointed to the proliferation of experiments in subordination against the social and political devaluation of essential labor, that shows the patriarchal and racist conditions of exploitation, which originate in society but affect the situation in the workplaces. The question was how to connect these struggles transnationally in order to overcome isolation and subvert this society.

This is the conjuncture in which the feminist network EAST (Essential Autonomous Struggles Transnational) emerged in 2020. The EAST network unites feminist activists and workers from Eastern and Central Europe and beyond with the goal to connect and support common struggles on the terrain of social reproduction. The project was initiated by the Bulgarian socialist feminist organisation LevFem and the platform Transnational Social Strike, but collectives from Romania, Serbia, Georgia, Poland, the Czech Republic, Slovenia, Turkey, Hungary, Greece, France, Italy, Sweden, the UK and countries beyond the European confines gradually joined. East Central European countries share a common history of the dismantling of the social welfare state, the privatisation of industries, goods and services previously under public ownership, and thus of a great crisis of productive work and social reproduction that has been mitigated through mass migration. The ruthless, systematic implementation of these reforms in accordance with exploitative and racist EU labor and migration policies, has set the conditions for the horrendous social-economic consequences of the pandemic.

The postcommunist  toxic mix of extreme primitive capitalist accumulation and the strengthening grip of (re)emerging (neo)traditional reactionary patriarchal politics that many countries in the region are experiencing influences the living and working conditions of those who stay and those who migrate, affecting production and social reproduction in the whole European space and beyond. To address these realities, we need a coordinated and common political initiative. EAST acknowledges the distinct developments in East Central Europe and in the different countries within the region, while also trying to connect the experiences and struggles in the “East” with the Western European and global movements. After all, capitalism, patriarchy and racism are global systems that reinforce and feed off extreme forms of inequality and violence, thus we need a global resistance to be able to effectively crush them.

In order to visibilize and deepen our understanding on essential feminist struggles in different countries within East Central Europe, EAST organised  a series of webinars between July and September 2020 with the support of the Friedrich Ebert Foundation Bulgaria. They centred around topics such as care work and migration, feminist, housing and labor struggles especially with a focus on the developments amidst the COVID-19 pandemic. Furthermore, EAST launched an Essential Strike Manifesto for the 8th of March that aimed at mobilizing women, migrants, workers, LGBTQI+ people whose labor is deemed essential, but whose lives are considered disposable. The texts in Essential Struggles: Pandemic Fronts are a result of these webinars, while the Essential Strike Manifesto finds its way. All of the authors took part as panelists during these online meetings. Their contributions should not be seen as purely analytical exercises. Along with providing detailed overviews of the current situations on the terrain of social reproduction in East Central Europe and beyond, the authors in this issue share many practical examples of ongoing essential feminist struggles and pose important questions about the future possibilities for a collective feminist resistance locally, regionally and transnationally. It is because of this reason, that we firmly believe that the edited volume Essential Struggles: Pandemic Fronts can empower us to share our knowledge and experiences of struggles, and to connect and amplify our voices, while learning from each other and becoming more effective in our struggles. We believe that each one of them offers valuable insights for our path towards a transnational social strike. But most importantly: we believe that the issue gives its readers both hope that a future without capitalist exploitation and patriarchal and racist violence is possible, but also tools to struggle for such a future.

Social services and care sector in and beyond pandemic: issues of Czech social and care workers and possible solutions through sectoral unions Eva Michalkova

From solidarity to politics: Transformative action along the Balkan migration route Sasha Hajzler

They will “manage somehow”: notes from Ukraine on care labor in the time of the local and global crises Oksana Dutchak

What did Bulgarian teachers learn from the pandemic? Darina K.

Who will pay for pandemic crises? Magda Malinowska

Lessons from the Therapist Union in Georgia Sopiko Japaridze

Essential Strike Manifesto for the 8th of March

From Rome to Glasgow: Accumulate Strength towards our Just Transition