States without Families. The Istanbul Convention and the Turmoils of the European Space 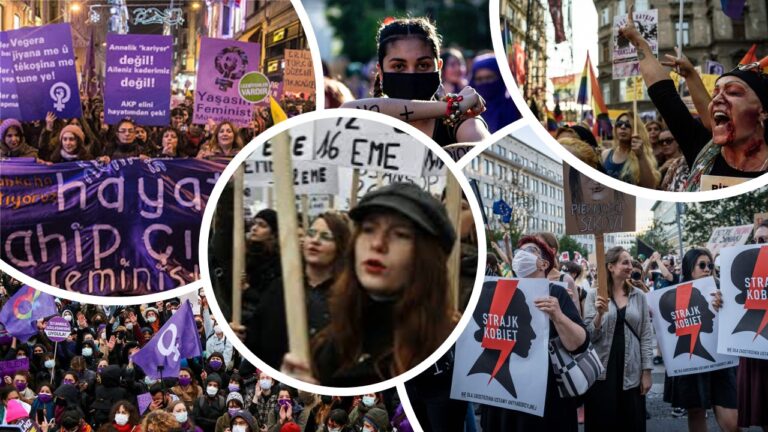 We publish the English translation of a text written by Precarious Connections towards the Online Assembly on the Dismissal of the Istanbul Convention in CEE and beyond organized by E.A.S.T. (Essential Autonomous Struggles Transnational) on April 11th at 6.30pm.

The March 8 mobilisation in Turkey has for years been moving through the streets of Istanbul, shouting “Run, run, run, Tayyip, the women are coming”. Tayyip Erdogan typically responds with repression. This year, however, he changed tactics. The police were instead ordered not to clamp down on the procession itself, but as soon as it turned dark dozens of women were arrested. On the 20th March, and once again at night, Erdogan withdrew Turkey’s membership to the Istanbul Convention via executive decree. Erdogan is afraid of the women who in thousands crowded the streets to challenge the patriarchal authoritarianism of his government. Withdrawal from the Convention means the declaration of a rule of zero-tolerance for those who dare to challenge the political and social authorities via a collective claim to freedom. Violence is the bastion that holds together the fortress of a family whose intangibility must be guaranteed by all means as a social necessity. And this is not only true on the edges of ‘European civilisation’: we are faced with countless family policies that in different forms and with different intensities are directing Europe’s reconstruction and transnational space. We must oppose these policies by all means, activating and consolidating transnational organisational processes capable of affirming the freedom of women and LGTBQ+ people against the reproduction of an oppressive society.

The Istanbul Convention is not and cannot be the definitive solution to the social reality of male violence. However, it sets a limit that is not only legal, but symbolic and political. This was clear to Zeynel Korkmaz, a Turkish man who, after stabbing his wife in front of their children, candidly claimed in a Facebook post that the Convention “ties men’s hands and leaves them hopeless”. Erdogan does not want men’s hands to be tied. By withdrawing from the Convention, he legitimises violence as an ever-allowed practice to strengthen the political rifts that threaten his triumph in the next elections in May by defending a social order of which the family must be the pillar. It is not a coincidence that the withdrawal from the Convention comes together with the attempt to exclude the HDP, the People’s Democratic Party, which has always supported the feminist struggle and that of Kurdish women and men, from parliament. As the country teeters on the brink of economic collapse, the government pursues the support of Islamist forces by claiming that the increase in feminicides is a lie and that in all cases the solution is not to be found abroad, but in national traditions and customs. The family must therefore be defended as a guarantee of social stability, and this is why Erdogan rejects a convention that denounces domestic violence, that conceives gender as a social construction, and that, according to him, is also guilty of encouraging homosexuality. Rejecting the convention means leaving a free hand against women who increasingly do not accept their domestic, social and political subordination; it means attacking the sexual freedom practised by women and LGTBQ+ people who individually and collectively challenge the patriarchal positions and hierarchies that the family institutionalises and society demands for its own stability and reproduction.

Erdogan and his government are not alone. After adding further restrictions to the possibility of abortion, the Polish parliament voted on 30th March to withdraw its accession to the convention and to start the process of writing a new charter, stating that the family is the place that protects women from violence and that the ‘gender ideology’ that destabilises the family must be banned. The ‘alternative’ charter should also be proposed to Hungary, Bulgaria, Slovakia and the Czech Republic, countries in which the Istanbul Convention was either recently rejected or never ratified: after falling apart politically when the EU at least nominally bound the recovery fund to respect for the rule of law, the Visegrad bloc is regrouping around the patriarchal reaction. The slogan “yes to family, no to gender” sets a front of a very material cultural struggle, the aim of which is to re-establish the social and sexual hierarchies that have been, more or less silently, challenged in recent years. As ‘Confindustria Est Europa’ recently stated, “the centrality of the family is indispensable for business and employment”. The professed anti-Europeanism of the Eastern front – which, like Erdogan, considers the Istanbul Convention to be “a foreign imposition” that undermines the pillars of tradition and individual cultures – is useful for blaming the Union for an ever-increasing precariousness. On the other hand, this eastern front does not intend to renounce neither European recovery funds nor western capital, especially German, which benefits from low wages also thanks to women’s free work in the home. Keeping women ‘in their place’, exploiting their work to make up for a welfare system that has been reduced to a minimum, allocating them on the family also through family-work reconciliation policies aimed at encouraging part-time work and procreation with subsidies for children, thus becomes a point of convergence between the two fronts. Order must be restored to a society whose patriarchal social institutions have been literally overwhelmed by the migration of women in essential jobs to Western Europe. Again, making women part of the family also means making care work a natural destination for them, devaluing it from a wage and social point of view in so-called essential jobs. Thus, the response to the battles waged by women in Eastern Europe in recent years, and even more intensely during the pandemic, is the valorisation of their maternal and caring role, which becomes the only fundamental means of access to services and subsidies and upholds procreation as an inescapable obligation to which women must bow in order to cope with the crisis of social reproduction. In this transnational logistics of reproduction, the outlawing of gender establishes the political illegitimacy of any claim to an improvement in one’s living and working conditions outside the family. So, while materially affecting LGTBQ+ people, who are denied services and benefits, the crusade against gender ideology should communicate to all women that the family is the only legitimate channel of access to minimal social support. The anti-gender crusade – which also in Italy continues to be practiced by shady figures in ties and by women who confuse feminism with anatomical gender certification – coincides with the attempt to close the current possibilities and practices of political connection between women and LGTBQ+ people against patriarchal social reproduction.

We do not believe in any way in the portrayal of the EU as a bastion of women’s and LGBTQ+ rights, just as we do not believe that it is threatened in the East by ‘anti-liberal barbarians’ and internally by ‘Islamic retrogrades’. The European institutions and the countries that claim to embody the most authentic spirit of the Union can easily declare themselves in favour of gender equality and the rights of LGTBQ+ people, while at the same time highlighting the different degrees of subordination of women and repression of sexual freedom that cross the European space and its external borders. Institutional racism binds Orban, the EU – which continues to focus on Turkey to implement its new mobility governance and financial plan to secure a patrol on the Mediterranean border – and Erdogan – who continues to persecute the Kurdish population and legitimise the rape of Syrian women in the refugee camps from which he profits. On the other hand, in its transnational articulation the EU is based on the existence of differentials that do not only concern wages and welfare systems, but also the interpretation of the principle of gender equality by individual states. The survival of northern European welfare systems – the few that still function on an individual and non-family basis -, the ‘reconciliation’ of motherhood and work envisaged by the Family Act in Italy, the cancellation or anti-gender formulation of social rights in Eastern Europe all presuppose, to varying degrees, the work that is as essential as it is disqualified, of women who, as wives and mothers, hold together the fragments of a precarious life, of migrants destined for essential jobs in exchange for wages that are not even enough to renew their residence permit, if there is one. While formally distancing itself from one of its states, Poland, by declaring itself a LGBTQ+-friendly space, the EU places no limits on the possibility of LGTBQ+ people being widely discriminated within its borders, when not openly exposed to the repressive violence of the states from which it draws cheap labour for its industrial capital and impoverished social reproduction. From crisis to crisis, before and during the pandemic, the EU and its states have contributed to exacerbating the conditions of precariousness and racism that affect women, expose them to violence, and limit their individual and collective possibilities to fight it.

In the face of the war against women that sustains the transnational logistics of reproduction, the legitimisation of male violence as a private supplement to guarantee order, the attempt to barter crumbs of welfare with the legitimisation of racism and the repression of those who practice sexual freedom against the family and its social order, the feminist initiative cannot hesitate and must be transnational. The attack on the Istanbul Convention is not a local and confined fact, but clearly indicates the stakes of post-pandemic reconstruction and the terrain of our possible and necessary initiative. We must reject by all means the positions of those who claim women’s safety and freedom at the price of those of LGTBQ+ people, recognising the need for a connection capable of effectively rejecting neoliberal family policies and attacks on those who challenge the social positions they impose. We need to recognise in male violence a social practice of enjoining the subordination and devaluation of women’s work, which makes it as essential as it is subordinate. We need to know that while defending the Istanbul Convention under attack, it is necessary to organise ourselves to overturn the social and political conditions that at all times make women more exposed to male violence, starting with institutional racism. We need to recognise that what is happening in Turkey, in Eastern countries and in Europe is a reaction to the mobilisations and struggles in which women, workers, migrants and LGTBQ+ people have been protagonists in recent years in the workplace and in society, challenging the boundaries of violence. Those mobilisations and struggles are our undeniable starting point and power the feminist perspective of the transnational social strike. If last 8th March the feminist strike came to terms with the limits that the social consequences of the pandemic placed on its organisation and mass practice, there is now an urgent need to challenge those limits by building political connections with the movements in Turkey and on the EU’s eastern borders that affirm the essential nature of the strike.

A Feminist Reconstruction: Essential Demands for 8M and Beyond