You Cannot Speak about Feminism if We are not Included. 8th March: the TMC Speaks from Moria 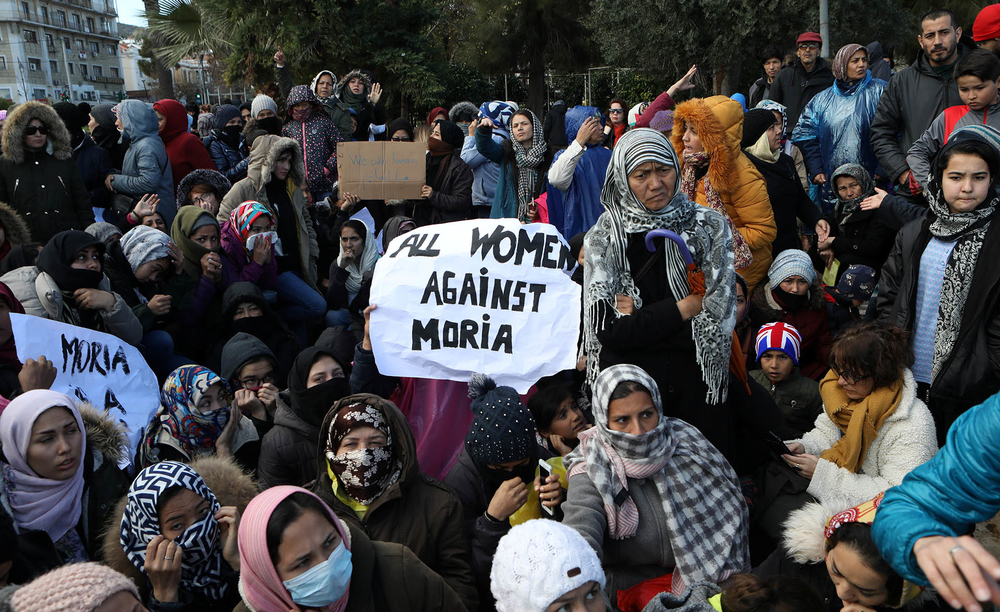 We publish a text by Women in Solidarity House, Lesbos, who are part of Transnational Migrants Coordination and join the call for a global feminist strike on the 8th of March. The contribution starts from women’s conditions and struggles in the new refugee camp built in Lesbos island, after the fire of Moria camp. These women live in deplorable sanitary conditions, constantly subjected to the racism of the institutions who arbitrarily decide to give them refugee status or not, and under constant threat of violence from the police in the face of their protests. However, they know that the answer cannot be fear and silence, but a struggle that goes beyond the borders of the island and gives voice and resonance to all those women who daily struggle against the racism of European and national institutions, against the violence they suffer in the camps and along the borders, to be free to move and to improve their living conditions.

We live in a world where rules and laws are created by governments and those in power, but at the same time those are not the affected ones. The media is used as a tool by those in power and they are criminalizing the oppressed ones to keep up profit and power and brainwash the rest. The whole world is watching this situation created on purpose for political and economical interest of the Western countries – such as their war games, weapon commerce and unlimited economical growth. In order to realize this, they are transforming our countries into non-safe places. When we need to migrate and look for a better future they are punishing us with militarized borders, hellish camps, endless waiting times and non-sense asylum procedures, consequences of their bloody deals.

We are the migrant women who experienced the worst camp in the world – Moria, and are witnessing now Moria 2.0 which was build after the first one burned down. The politicians are trying to realize their criminal and inhuman politics here, not visible to the outside world. As they want to create a fake truth about Moria and the troubles that migrants are experiencing, they started to threaten the people who are showing this reality with images. Now taking pictures of the camp is forbidden and if we still do, we are being threatened with deportation or by cancellation of the refugee status. They are trying to limit and silence the demonstrations of migrants. When we want to speak loudly about our problems, the police are attacking us violently with tear gas.

We are supported by numerous solidarity people but at the same time many Western NGOs are trying to exploit our work to increase their profit. We are working unlimited working hours, with ridiculous payments but mostly even for free, because we become their volunteers. Our images of suffering are used by them in order to increase their donations.

We, as migrant women, live the worst conditions in the camp. The camp is not safe for us, the hygienic conditions are terrible and especially difficult for woman. Extreme measures are taken by people to rise up their voices after facing a systematic passivity to unfair, violent and neglected situations. Our bodies burn because of injustice and neglect. The exercise of keeping ourselves alive puts our own lives at risk. The system wants us dead.

Even if you are not able to hear us it doesn’t mean that we are silent and we don’t resist. We were never really silent. If you paid attention, you could hear our voices among the tents of this camp of shame, among the sounds of the fights in the camp, among the cries of so many who couldn’t take it anymore. We are still looking for a way to free ourselves, raise our voice with different ways even though most of the world is ignoring us. As migrant women who come from patriarchal cultures and countries where women are pushed down by men, in addition to that, we also face a racist system and the pressures of an unfair and unedifying asylum procedure.

In this situation, because of being women living in a patriarchal world, we are the ones who have to take care of children & family and are expected to provide food while being stuck in an island what makes us deal even with more problems. We as migrant women are facing a double discrimination and suppression by patriarchal and racist power. When we come to Europe we experience islamophobia even by people calling themselves feminists while feminism actually means to be self-determined.

How can we fight together against patriarchy when we do not stand in solidarity as women?

If nobody raises their voices for us we have to stand in solidarity and fight for each other. Women support women. We know that LGBTQI+ are sharing the same oppression and struggles by patriarchy as we do and we want to stand together in solidarity in our struggle, fights and resistance. As long as our bodies, sexuality and rights are chosen and judged by others we cannot talk about equality. We are standing all together against patriarchy and against the migrant worker exploitation of European neoliberal system. Walls, fences, and concentration camps in the borders of the Fortress Europe are the consequence of a triple system of oppression. Patriarchy, colonialism and capitalism. Three systems of oppression connected, articulated. Building on each other, feeding back on each other. We cannot denounce one without denouncing the whole. We cannot understand one without understanding the system. When we want to smash one, we have to smash them all.

Despite the terrible circumstances we are stuck in, we are still looking for ways to continue resisting and building a future with justice. We reach out to the women of Europe and worldwide. We have no rights. We need to build bridges that allow us to be stronger, to reach further, to destroy borders. Those borders that also divide women, that prevent us from recognizing each other. You cannot speak about feminism if we are not included. The system will not fall if the borders do not fall. Because sisterhood is the way. Smash the patriarchy, smash the borders!

We send our solidarity to all the women collectives of Transnational Migrant Coordination  and we support the transnational 8th March strike. We believe that we should fight everyday  for our rights. If we stop the world stops.

Open the Borders, Stop the War!