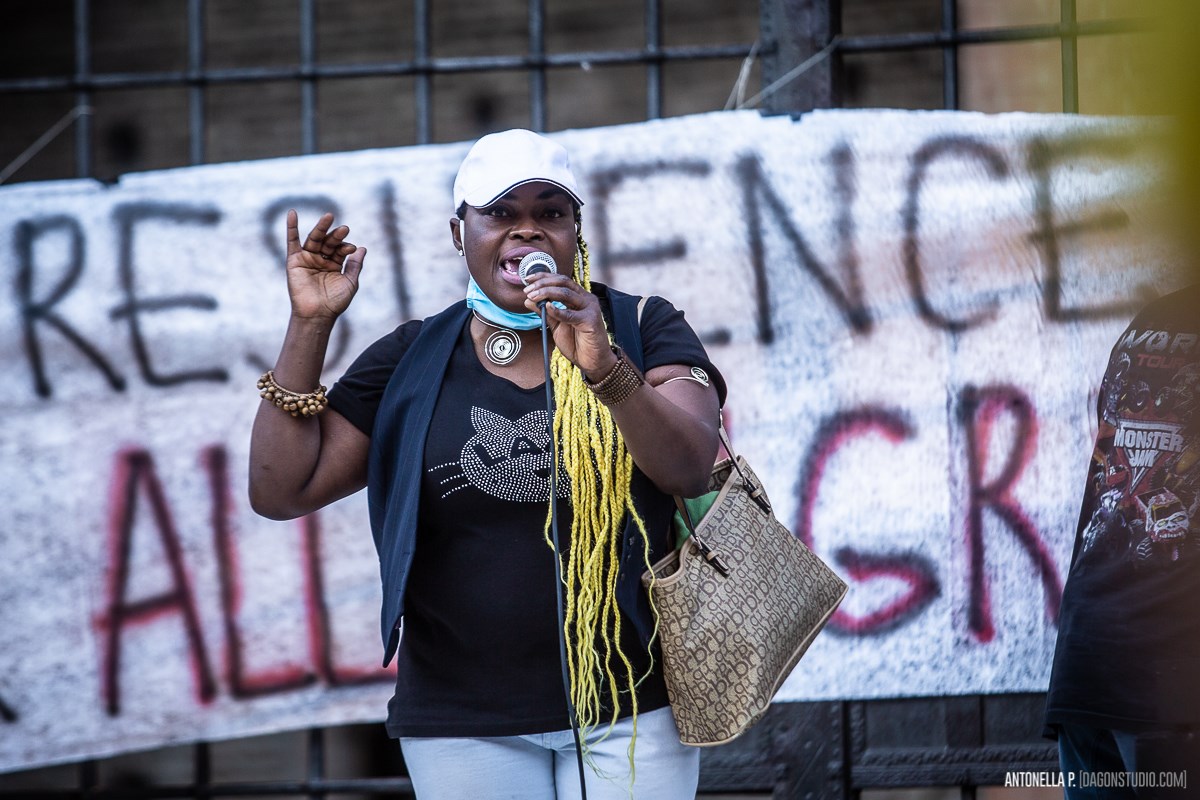 We publish a powerful document written by the Assembly of migrant women that held its first public meeting in Bologna at the beginning of October. The crucial question about how to struggle within the pandemic is raised, with the determination to break the isolation and involve all those women who during the pandemic have done essential jobs, have been fired or are hit by male violence and immigration laws. They say clearly that their struggle is linked with those of women, migrants and feminist who are struggling in other locations: for this reason they will take part in the transnational day of migrants struggles of October 17th and in the E.A.S.T. online assembly on 25th October.

Saturday, October 3, the Assembly of Women of the Migrants Coordination organized in Bologna the first public meeting of women who want to fight against male violence, racism, exploitation and poverty. Nigerian, Tunisian, Italian, Moldovan, Moldovan, Senegalese, Kurdish and Sierra Leonean women met to continue the path of struggle born months ago. We live different conditions, but we know that these conditions are connected to each other, and that to face them we need a collective space of confrontation, speech and organization, at a time when the pandemic risks are making our lives even harder and reducing us to silence. We cannot accept this silence.

Being women, being black, being migrants, being poor, being all these things together makes it more difficult to fight, but it also makes it essential. What does it mean to fight together? How to involve and talk to all those women who cannot participate because work, institutional racism, family or fear lock them up? When we try to involve other women, some of them say “I can’t talk, I’m waiting for the document and I have to be quiet”; “now that I have found a job if I show up in public they can fire me”; “if they see me protesting I lose my place in the shelter”. Or they say “demonstrating is useless, I’ve done it before and I’m still here, while I’m breaking my back doing three different jobs to be told that my income is too low to renew my permit or to obtain citizenship”. We know that many women, migrants and Italians, are now resigned to this normality, even if they face and fight it every day. We cannot deny this reality; still, we cannot tolerate it.

Facing this reality means giving voice to all these conditions. It means recognizing that they are our problem and that if we ignore them, if we silence them, we will not have the strength to fight the violence that oppresses us all. With this Assembly, we want to reach all those migrant and Italian women who do not have the possibility to fight, because if we want to change something we can no longer be divided.

This Assembly was born because in the square each one of us has found her voice in the voice of the others. Recognizing this common space is the first step to reject the normality of violence and to give concreteness to our feminism. To reject immigration laws such as the Bossi-Fini, designed to wear us down and make us surrender, which prevent us from being autonomous even if we break our backs to become autonomous. So that you no longer have to hear the warning of a father who has been telling you since childhood that as a woman, black and Muslim, your life will be more difficult than that of others. To reject the racism that begins at school and continues when at the age of 18 our children must ask permission to stay in their country, or risk being attacked and killed in the streets. To refuse that as a woman it is normal to have a lower income, to be poor. We want the words of our struggle to express the anger of all the women who are living “underground”. Because they have a husband at home who oppresses them, because at work the bosses treat them like machines, because the residence permit blackmails them and endangers their lives; because the domestic work confines them at home, because the impossible work shifts make it very difficult to fight and even live.

Our collective voice is in the struggles that women continue to carry on everywhere. We have been part, together with women and workers from Eastern Europe and beyond, the E.A.S.T. network to connect feminist struggles, at work, in the home, which in recent months have been the response to the exploitation and racist and patriarchal management of the pandemic. In these months, many of us have participated with the Migrants Coordination in the Transnational Migrants Coordination and have also organized themselves across borders. Thanks to this transnational initiative our struggle is intertwined with that of the migrant domestic workers in Spain fighting against the confinement measures that deny their health and freedom, with that of the Kurdish women and men in Turkey who are carrying on the transnational battle against racism and challenging the repression of an authoritarian government and many other struggles that today are united by a shared project. We are linked to these struggles and we must spread them everywhere, because they give us the strength to know that we are not alone and because courage is conquered collectively.

In every life project we feel the weight of difference, the color of our skin, the way we talk, the residence permit and the jobs we are forced to do as women. It is time to make us feel the weight of our difference to reverse this situation. The first opportunity to do so is the day of transnational struggle on October 17 for a European residence permit untied from work, income and family and for our freedom! In that square we will shout loudly again that, there is no freedom for women if we do not fight every day the racist violence and exploitation that oppress us. This is our project, towards October 17 and beyond.