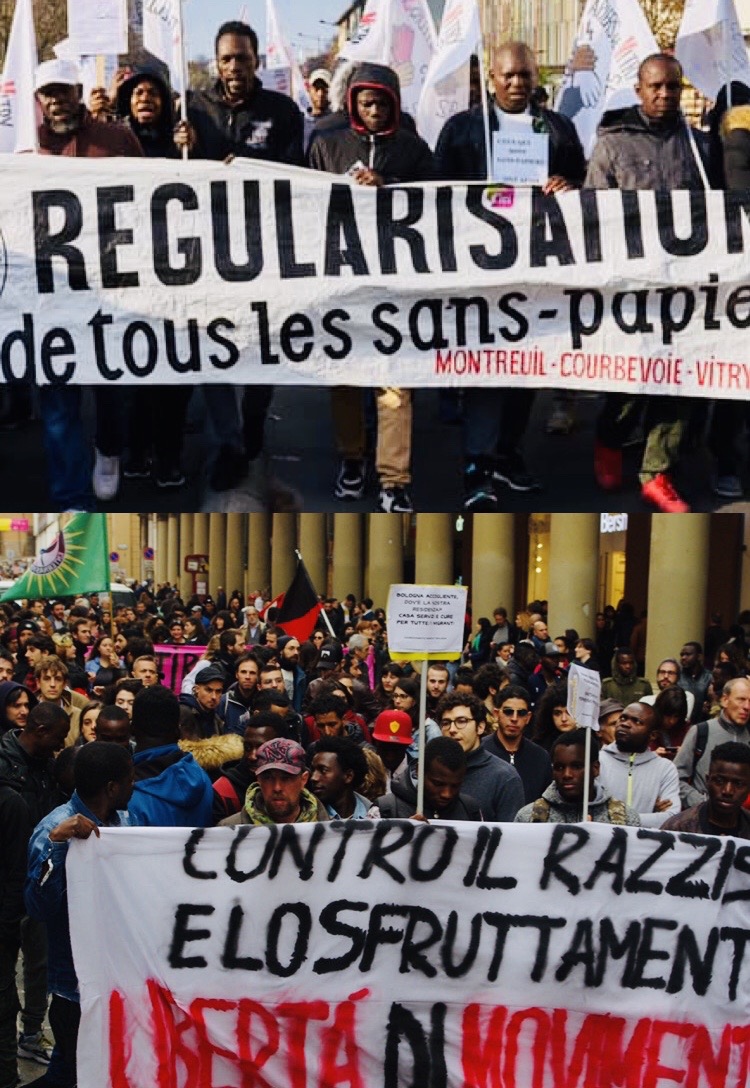 In these months of pandemic we never stopped fighting against racism and exploitation. We are protesting the miserable life conditions in reception and detention centers, in ghettoes and camps where we are highly exposed to the risk of contagion. Many of us are refusing to go to work without protections. Others are going back to their countries. Others are refusing to become disposable workforce for companies, as established by international agreements between European and non-EU countries aimed at recruiting seasonal workers. Many of us are striking in factories and warehouses in Europe and beyond. Countries like France and Portugal are recruiting exclusively refugees or regularizing all or some of them in order to make them work in the farms; other countries are organizing charter flights for seasonal workers and special corridors for farmers and care-workers; several governments announced migrants’ regularizations in order to cope with production demands. This is not the solution for us! We do not want a paper which legalizes the right to exploit us! We want freedom of movement, freedom from institutional racism and exploitation. Our life cannot be at the mercy of the link between documents and work or family status.

The global pandemic is showing that, while migrant labor is considered essential, the same doesn’t hold for migrants’ lives. We, migrant women and men, can be left to die in the sea or on the European borders; we can be shut in detention or reception centers; we can be fired and become illegal; we can be left on the streets without a home. But migrant labor is constantly necessary for the care of the elderly, kids and sick people; to clean houses and offices; to pick fruit and vegetables before they rot in the fields; to keep things going in factories and warehouses where the production is hastily restarting. In Europe as elsewhere States are using the pandemic to turn migrant labor into a mere instrument to save profits and to be moved wherever it is necessary and only for the time necessary. Our lives matter only if we enrich someone other than us: this is what national laws on immigration, European policies and international agreements say.

Today more than ever our struggles cannot stop at the borders and be limited to contest national laws which tie us to employers, income or family reunifications. Therefore we need to break the isolation of our struggles. We crossed the borders and we challenge them every day: we cannot be at the mercy of every single government’s calculations. We have already gone on strike and protested together in France, Italy and other European countries. Today, when the EU states are negotiating to intensify the exploitation of migrant labor and the institutional racism which sustains it, it is even more urgent that we speak with one voice. For those who have been living under the blackmail of residence permit for years; for those who are still undocumented after many years; for those who will become illegal because of the pandemic; for those who have just arrived and saw their asylum application denied; for those who are fighting against borders’ violence inside and outside of Europe; for those who suffered and are still suffering sexual violence in the Libyan camps and elsewhere: we claim an unconditional and unlimited European residence permit, which is not linked to family status, income and labor. Against racist policies which constantly demand us to provide essential labor whereas are lives can always be sacrificed, it is time to organize across and beyond the borders: it is time to assert out freedom against exploitation.