Amazon Workers on Strike on Prime Day: No More Discounts on our Wage! 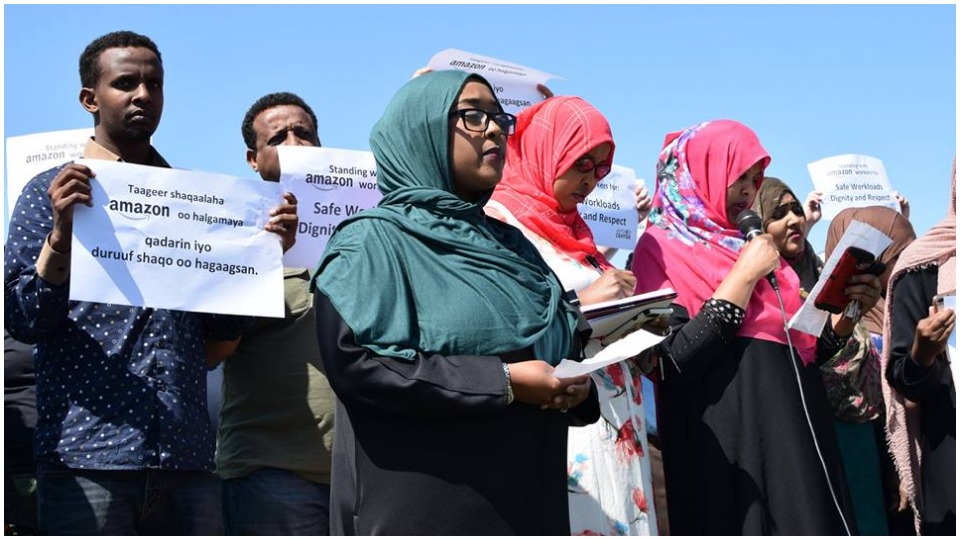 With a transnational wave of strikes in occasion of Prime Day on the 15th and 16th of July, workers at Amazon have indelibly soiled the glittering façade of one of the main global companies of our times, paving the way for future struggles. In Germany, France, Poland, United Kingdom and United States, workers protested and went on strike when discounts cause a peak of sales and a considerable amount of extra-work in the warehouses, to protest the low wages, the unbearable level of exploitation and the system of feedbacks and performance rates. With resonating actions, the protest targeted the extreme fragmentation of working and wage conditions which puts workers against each other. Not only workers and trade unions operating in Amazon, but also other organizations and professional trade unions supported the strikes.

In Minnesota, the Awod Center and other organizations called for a strike on Prime Day in the Shakopee warehouse, where since 2017 migrant and refugee workers, especially from Somalia and other East-African countries, who represent the majority of the employees, have been contesting harsh working conditions and the racist policies of Amazon. Despite the pledge by Amazon US to pay a salary of 15$ per hour for all its employees, with the expectation to stop any unrest while at the same time counteracting labor shortage and the high turn-over due to the severe labor conditions, the workers do not settle for what Amazon is willing to give in, but want to get what they asked for. The Amazon employee Hibaq Mohamed declared in one interview that the workers hurt themselves because of exasperating working rhythms: if they do not reach the performance rates required, workers are punished and badly treated. Therefore, they demand a reduction of the productivity rate, pay rise and improvement of working conditions. On the same day, simultaneous demonstrations took place in 8 American cities against Amazon’s collaboration with US immigration authorities. Thanks to its surveillance through Web Services, Amazon is effectively enabling Immigrations and Customs Enforcement (ICE) to detain and deport.

In Poland, Amazon workers started a historical referendum which is legally required to call for the strike, after Amazon management left the negotiation table initiated by the trade unions OZZ-IP and Solidarnosc. The two organizations demanded higher wages, the abolition of the system of feedbacks and controls and a halt to the abuse of temporary work. On Prime Day in Poznan and Wroclaw warehouses Amazon workers went on “informal” strike by taking sick leaves. That same day, Amazon Poland declared that they will raise the hourly wage to 4,68-euro gross (20 zloty) for all newly hired employees, thus only partially accepting the claim for a rise to 25 zloty. This is far from enough, given that Amazon workers in Germany, only a few kilometers away, get three times more. Amazon moreover announced the opening of a new warehouse in Okmiany, South-West Poland, close to the border with Czech Republic and Germany. The strategy to use Poland as a reservoir of cheap labor for the German market continues, in the attempt to jeopardize the capacity of the German workers themselves to block distribution when striking. No matter what, the strikes in Germany go on: on Sunday night in Werne, Rheinberg, Leipzig, Graben, Coblenz and Bad Hersfeld the workers started the action with the slogan “No more discount on our incomes”. Around 2500 Amazon workers took part in the strike asking to apply the collective agreement for retail and mail order sales. In France a strike was launched at the Lauwin Planque (Lille) warehouse on 15th and 16th of July. The trade unions CGT, FO and SUD supported the strike and on Monday a picket blocked the trucks. Workers demanded the abolition of the practice of freezing summer holidays, the ending of any sanctions for low performance rates, denounce the delays in processing sick-leaves and on-the-job injuries and protested against mistakes in the pay-slip, a bonus for Prime Day extra-work, and finally the retraction of the proposal of modifying the collective agreement in France by applying the one for logistics. 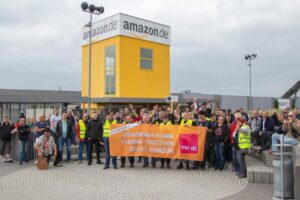 Amazon continues its policy of using wage differentials across the borders, different contracts and strike legislations in order to divide the workforce. It bases its projects of profit-making on the assumption that no transnational force can be built against it, that no common claim can be advance by all the European workers of Amazon. Though, there is clear sign, each year stronger, that this assumption will soon be smashed. Major disruptions to Amazon’s plans are to be foreseen in the near future. The question of how to keep strengthening links across the borders in order not to allow Amazon to be the only one to take advantage of transnational connections will be on the agenda of next transnational Amazon workers’ meeting on 27th-29th September in Leipzig. As Transnational Social Strike Platform we support since the beginning the efforts for stronger transnational coordination among Amazon’s workers, and we will publish a journal with voices from different countries on the possibility to engage in a transnational struggle over wage, and claim an equal wage for all Amazon workers in Europe and beyond.

Even though the company stated that the strike turnout was very low and that the damages caused by the strike were contained or null, we know that the strike is a powerful weapon and a show of strength on the side of the workers. This is why Amazon tries to prevent it by all means, to block workers’ organizing and stop solidarity from outside. But the struggle of Amazon workers goes on and each time the transnational links grow stronger.