Over 3,000 workers in the manganese mining town of Chiatura (Georgia) started a wildcat strike 15 days ago in spite of the three unions that operate there, including one that signed a collective agreement last year that forbids strikes for three years. The whole town joined them in the strike while workers from the coal mine, ferroalloy plant, metro workers, and students and activists from Tbilisi all visited in solidarity. Unlike other strikes where workers stop production, this strike included stopping all transport of manganese supply as well. The main roads were blocked. Their demands were: 50% salary increase, no more vehicles full of manganese driving through the town, better health insurance and healthcare, and better food provided by the company. A small group of workers also started a hunger strike and remained within the center of town in tents, also beginning to sew their mouths shut, one by one, for each day that their demands were not met. The resonance began to magnify as more and more people joined the strikers across the country and as talks between miners and the company had fallen apart. Government officials have been the progress, though two days ago when the minister of finance was supposed to visit the company threatened with a lawsuit against the workers for starting an “illegal” strike.

This strike was started by one shift of workers refusing to go to work in the new work regime called the “Wachtian” system, which is the most brutal shift in the mines. When asked what the origin of the word “Wacht” was that people kept using in Chiatura to describe the new mining “system,” no one knew. After some digging, it turned out to be from the German word for “watch” or “guard” The name is quite apt, this new work regime means that the workers are being watched and guarded for 24 hours a day, 15 days a month. They work 12 hour shifts every day for fifteen days, sleeping in a dormitory that used to be a Sanatorium during the Soviet Union where workers used to be treated and rested during periods of physiologically and mentally more difficult work. Nowadays, the Sanatorium is where the workers are watched closely so they don’t go home to visit their families or see their friends even though many miners’ houses are one street over. The irony that the Sanatorium that was once a symbol and restplace of the workers’ state is now transformed into the center of their heightened exploitation. It’s the state of class struggle in Georgia.

After the 15 days of work are over, the miners go home and rest; according to their reports, the first week is spent just sleeping to regain the strength they lost. When they return to the mines again,they have to work night shifts of 12 hours every night for 15 days. It alternates every month between day and night shift. The food is inedible, the workers say. They mostly fill it with cheap carbohydrates and reserve meat and other protein once or twice a week. The water they are given for a 12-hour shift is half a liter. The worst part of it is that these new mines that were re-opened in this regime don’t have railways built inside like the other mines to transport the manganese. The company doesn’t want to make the investment nor lose any time since this new system brings out 4-5 times more manganese per shift than the traditional 7 hour shifts over the course of 24 hours that was the “old system.” Miners are trapped in mines where the exhaust of the trucks fill their lungs for 12 hours every day, the fumes have nowhere to go in a closed in space but the lungs.

These same trucks that carry manganese which are secured sloppily, drive through the city where children play, fruit and vegetable stands are located, and the population of Chiatura work, relax and live. The women in the market talk about their products being covered in manganese. The river that runs through the city is toxic from the runoff of the mines. Cancer rates are through the roof. The closest hospital is one town over. The company’s health insurance provider for medicine is located in one tiny room where workers have to stand in line sometimes for two days just to get a prescription. There aren’t enough ambulances in the city. On site, in the mines, there are either no emergency care workers or not enough. Last time there was a diagnosis of occupational disease in Georgia was in 2016 for two people, and one of the diagnoses was that manganese exposure caused Parkinson’s. The company indirectly harassed the doctors enough prevent any other diagnoses since then. For comparison, during the Soviet Union, there were about 150 occupational diseases diagnoses per year. Now it’s 0.

No miner seems to understand why a private company controls Georgia’s natural resources and all the infrastructure and equipment that has been inherited from the Soviet Union. They keep saying “Foreign Direct Investment,” but where is the investment? The workers have been fixing their own tools for digging, maintaining vehicles and railways for years with no improvement from management. This private, part-foreign company controls the entire city, the local government, pollutes the population, creates serious health risks and costs, makes no investment, takes the labor from the locals and directs all the profit from something they didn’t make, to their own growth. Often one hears the lament: such a rich town, with such poor denizens. That’s why the workers have been demanding the private company to leave and some of them have started calling for nationalization. How nationalization might at all be compatible with the current practice removing any obstacle that might interfere with attracting investments into Georgia, and how it would relate to the transnational dynamics that criss-cross these interests, is yet another open question.

Chiatura, where miners have been excavating manganese ores since the 19th century, is now owned by Georgian Manganese, which is wholly-owned subsidiary of Miami, Florida-based Georgian American Alloys. The discovery of manganese in 1846 changed the region. A town was built and in 1913 this tiny country was the leading exporter of manganese worldwide (50% supplied). After brief closure of the mine in 1921, it was opened and nationalized in the early days of the Soviet Union and then during the economic experimentations of the 1920s before collectivization it was given to an American entrepreneur, W. Averell Harriman, for twenty years to revitalize it with the underlying assumption that he was more capable than the Soviet government, but he failed to restore the fallen production and the mine was re-nationalized in 1928. During the first five-year plan (1928-1932) a new ferroalloy factory was constructed in Zestafoni (close to Chiatura) in order to “clean” the manganese in the factories before export. A hydroelectric plant was built in Vartsikhe to power the production.

Before the institutionalization of pro-worker policies in the Soviet Union, the working conditions in Chiatura at the end of 19th century and beginning of the 20th century were described as low pay.  Shifts lasted 17-18 hours. Workers slept outside in the summers and in the mines in the winter due to lack of housing and otherwise awful living conditions, were routinely thrown out of work when they weren’t needed and then driven from the city in order for them not to influence other miners. Overall, there was no labor inspection, occupational safety, there were no hospitals and no regulations as to the length of the  working day. During the Soviet Union, most of the infrastructure was built and finished in the mines and the city including the cable cars that take workers to mines. The workers were not allowed to be in the mines over seven hours since it was bad for their health, they had extra food, more vacations and trips to wellness centers, not to mention a whole institute dedicated to investigating working conditions. They also had housing provided by the state, full wages, disability pension and safe working conditions.

The collapse of the Soviet Union and the savage privatization of the 2000s led the workers to be completely powerless, their wages cut, left with no support from the state, their working conditions wiped away and mounting debt. The quick financialization and easy access to credit combined with privatized healthcare and low wages, made it impossible not to get into debt. Almost everyone says casually when asked, “Who doesn’t have debt?” The average salaries are between 180-350 USD a month, there is no lower pension age, no compensation or disability pay, poor health insurance and healthcare, and unsafe working conditions. Georgia is by now turned into a “service” country to foreign companies, also thanks to an Association Agreement with the EU that aims at turning the country into a “business friendly” environment.

Workers, men and women, have nonetheless kept fighting over these years. These recurring problems have been temporarily muffled by each renewed struggle, with 10% wage increases and heaps of false promises. The current  strike is the culmination of the last two decades of experiences in Chiatura. This is why they refuse to appoint a leader for the strike, this is why they refuse all unions, and this is why they aren’t settling for the crumbs the company is offering. It’s been over 15 years of wholesale privatization, financialization and the demolishment of social services and labor conditions. There have been many wildcat strikes in Georgia, but this strike in Chiatura seems to be the decisive strike against the neoliberal policies thus far and the business unionism that hasn’t brought any tangible victories. This strike is telling of the local effects of transnational transformations and of the ongoing resistance that projects of exploitations and impoverishment meet everywhere, from Georgia to Hungary, from Poland to Italy to Turkey. While presenting us with a new idea and practice of the strike, involving a whole city and blocking all the city life, the strike ended two days ago with most of the demands being met (though wages will increase 25% immediately and an additional 10% by the end of the year). The town was rejoicing all evening and despite the many problems left to be solved and the glaring continuation of exploitation, the workers and the town deem this a huge victory. 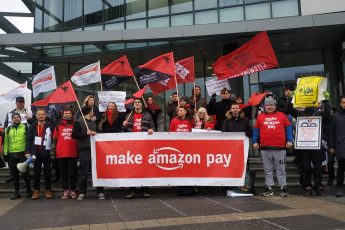