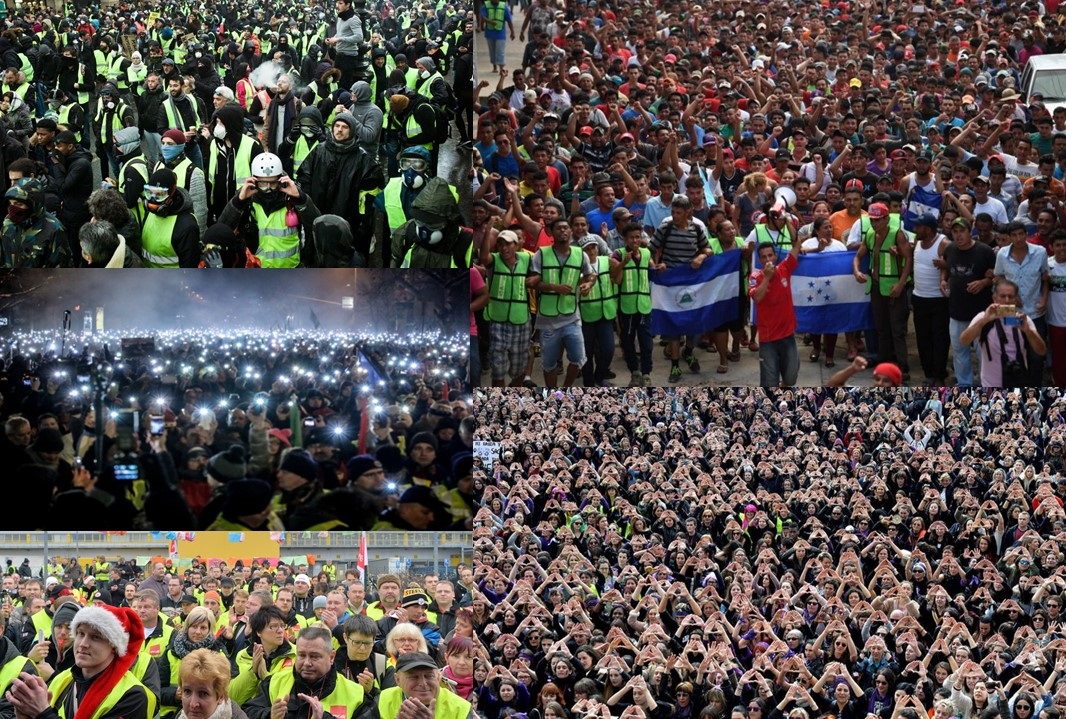 RESOLUTION FROM THE STOCKHOLM MEETING: ROADMAP FOR STRIKING BACK AGAINST THE LOGISTICS OF EXPLOITATION. A COLLECTIVE COMPASS FOR ACTION.

In all corners of Europe, migrants, industrial and precarious workers are striking and leading outbreaks of massive insubordination against impoverishment and precarity: the violent attack against labour and social struggles is the expression of a preoccupation for order and social peace, shared by neoliberals and nationalist governments. We, unions and collectives, workers and activists from more than sixteen countries from Europe and beyond – from Sweden to Greece, from France to Georgia, from German riders to Polish teachers, from migrant porters of Italian warehouses to Amazon workers from Spain, Poland and France – assembled in Stockholm for the 6th meeting of the Transnational Social Strike Platform have recognized the following points as a collective compass to intervene in the present situation and orient our action.

I. THERE IS NO NATIONAL SOLUTION TO THE CRISIS. After the crisis of 2008, the normality of Europe is made of a generalized precarity, increasing control of migrants’ movements, cuts in welfare benefits, the imposition of new hierarchies in society, reactionary policies against women. In this scenario, it is neither possible nor desirable to go back to the national social-democratic compromise and to ignore the transnational dependencies on which national processes are predicated. We have been part of the struggles that, from Italy to Spain to France, from Poland to Germany to Sweden to Georgia, have hit the logistics, industrial and transport sector in the last ten years. We have often been successful in gaining better conditions locally. Nonetheless, we recognize that the overall political and social situation is far from being acceptable. For our force to grow stronger we need to find common transnational objectives. The only weapon against both austerity, and right- and left-wing nationalism is the consolidation of a transnational movement of insubordination.

II. THE LOGISTICS OF EXPLOITATION IS OUR TRANSNATIONAL BATTLEFIELD. The logistics of exploitations is not limited to the logistics sector as such, but rather implies an overall transformation of work relations and of society. Logistics is a force able to impose and organize capitalist domination on a transnational level, and to make every local context intertwined with global and regional dynamics. The logistics of exploitation empties out rights and protections obtained through decades of struggles, combines different rates of exploitation, hides industrial labor in places far away from metropolitan gazes, and produces fragmentation and isolation in the attempt to neutralize the capacity of the strikes to harm profits. The fantasy of logistics is to shape society according to the needs of profit making, with governments contributing in helping to make this dream come true. Governments and employers are sacrificing workers’ flesh on the altar of investments and global profit. We refuse to adapt to this loathsome trading and to accept the poor compensations offered by national governments. In our fight against the logistics of exploitation we mean to refuse at the same time its local and its transnational tenets. We want for each concrete moment of insubordination to gain strength from cross-borders connections.

III. STRIKE AS A POLITICAL WEAPON. The logistics of exploitation develops to circumvent workers’ gains. Victories amongst one segment of the workforce are unloaded on the shoulders of those who stand below, migrants or precarious workers. Logistics works so as to make sure that rise in wages in one spot are paid either through lower wages in other spots or through lengthening of the workday, intensification of work rhythms, rise in taxation, loss in terms of bonuses and benefits. The fight for localized gains needs to be coupled with a political use of the strike that aims at overthrowing hierarchies between groups of workers, between nationalities, statuses and contracts. This is what governments and employer’s federations fear. This is why they everywhere try to limit the right to strike and bind workplace conflict to being exclusively about contract negotiation. We know that every contract is at the same time a way to settle some conquests, and a way to prevent further struggles, to exclude grass-root unions and to seal a deal that decides who does and who does not have the right to fight for gains. We refuse any limitation to the right to strike and aim at turning the strike into a political weapon that disrupts negotiations and invades society.

IV. THE FEMINIST STRIKE. In the belief that the strike needs to break its legal and territorial constraints and go beyond the single labor dispute, we believe that the global women’s strike shows us the way. The women’s movement has been able to give back to the strike its power. The feminist strike has succeeded in making the strike available for non-unionized workers, untying it from any form of negotiation and overcoming the barriers between sectors, categories, nations. The women’s movement has pointed out that no logistics of exploitation can exist unless women’s subordination is secured, and the ties of the patriarchal family are consolidated. In confrontation with this, the strike has been reinvented and turned into an overall movement of radical transformation against exploitation, and against the patriarchal and racist hierarchies that are used to intensify that exploitation. We state firmly that we will support and push the next global women’s strike on March 8th in all possible ways.

V. STRIKE THE BORDERS. Migrants have recently been at the center of powerful waves of struggles and strikes in the logistics sector. We mean to rely on the power expressed by migrants and by this we say that the age of solidarity is over, whereas the age of a common struggle begins. Nothing more than migrants’ movements put into question the logistical fantasy of displacing and directing goods and people as needed by profit-making. We believe that unless we tackle the systematic ways in which national governments, the EU and employers turn migrants into a cheap labor force, while pointing at them as scapegoats, any conquest will end up in a defeat. We claim that the struggle against institutional racism and the blackmail of residency permits linked to labor contracts is part and parcel of our struggle. If they touch one, they touch everyone.

VI. 2019 WILL BE UNDER THE SIGN OF THE STRIKE. From houses to workplaces, from warehouses to factories, from borders to the squares and metropolis: 2019 will be under the sign of the strike. We plan to make this year a year of transnational struggle, in order to turn a widespread, but dispersed insubordination into a powerful political force. We are working on a common plan and common objectives: we need to coordinate among different warehouses, different spots of the transnational chains of value, and at the same time elaborate a vision and demands that we advance collectively and that can build tools of communication across branches, sectors and conditions. Starting from the existing forms of transnational organization of the distribution centers of Amazon in Poland, Germany, Spain and France, that on Black Friday had the latest moment of visibility with strikes and actions in several location throughout Europe, we are working towards a year of struggle that will lead to the next Black Friday to make out of it the black week of capitalism and the point of outbreak of a transnational force. 2019 will be under the sign of the strike: our program is to engage ourselves and actively promote the global women’s strike of March 8th and the interaction with mobilizations by migrant and native workers that have shaped the past years of logistics’ struggles. We will arrive to the next Black Friday, by multiplying the moment of amplified confrontation and discussion, starting from a meeting of Amazon workers that will take place in Poznan in March and continuing with an assembly in Georgia, along the global chains of value and beyond the institutional borders of the EU.