The Hungarian Movement Against the „Slave Law“ 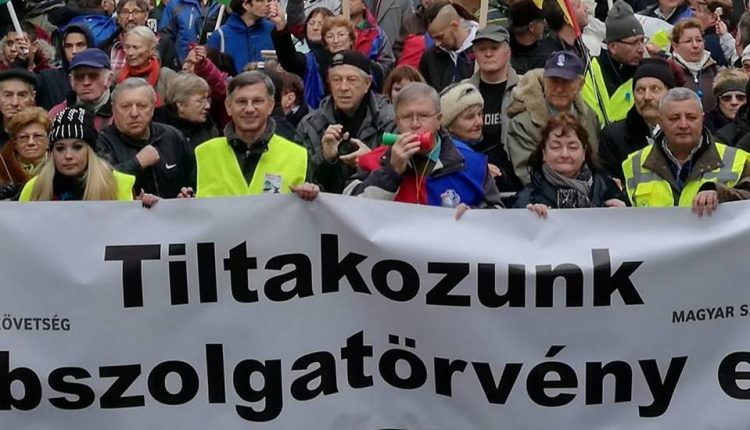 We publish an interview made by Marek Čaněk to Nikoletta Kiss and Balàzs Bàbel of the Youth Committee of Hungarian Trade Union Confederation after the big demo held in Budapest on the 8th of December against the so called ‘slave law’  under discussion by the Hungarian parliament. The law introduces a raise in the maximum overtime (from 250 to 400 hours per year), paving the way to an arbitrary use of extra time by the employers and making work heavier and more precarious. This would particularly hit the Hungarian industrial sector, firmly included in transnational production chains, which link Hungarian labour market with other countries, particularly Germany. This shows how the authoritarian rule of the Orbán government, and the nationalist discourse that blames migrants and promises to halt the country’s demographic decline, are functional to support the logistics of exploitation, which makes Hungary a knot for global industries such as Audi, BMW and others. Foreign investors already benefit of special taxation in Hungary, and with this law, they will be able to modulate the intensity of shifts and working loads at will. The strong reaction by trade unions and workers seen in Budapest follows pivotal strikes that hit the retail chain Tesco and the carmaker Audi over wages last year, and the recent mobilization by students and academics of the main Hungarian universities for the freedom of knowledge and against the precarisation of research. These events show that the wage increases promised by the government, while only marginally affecting companies’ profits, are far behind workers’ needs, whereas flexibility and precarisation have become a widespread condition. Besides the openly authoritarian attitude of Orbán’s government, reforms and acts are in fact setting the country in line with developments seen elsewhere, from the Hartz IV in Germany to the Loi Travail in France, from the recent anti-strike law in Sweden to the Jobs act in Italy. Moreover, the Hungarian government stands firmly behind the line of hard austerity within the EU. The convergence of workers and students in the protest in Budapest and the announcement of possible waves of strikes against the proposed law are two signs of the fact that, notwithstanding Orbán’s attempt to rally Hungarian society behind the flag of anti-immigration and anti-foreigners’ influence, insubordination is around the corner.

You find the interview published in Czech at this link: http://a2larm.cz/2018/12/madarsko-stoji-pred-otrockym-zakonem/

What is the contents of the government’s proposed legislation? Why do you call it a „slave law“?

The government party wants to raise the maximum overtime hours from 250 to 400 a year.  If this amendment is passed, the employer can demand the 400 hours based only on a written agreement with the employee. And as we know, employees are often in a vulnerable position and feel that they cannot contradict their employers. Moreover, because the 400 hours are based on a written agreement, in some cases the hours are not considered as overtime, and the employees will not get the bonuses.

Another important part of the amendment is that the frame for unequally spread working time will be extended from a maximum of 6 months to 36 months in a company which is covered by a collective bargaining agreement. This means that in special cases, for example if someone is working in continuous shifts, then he or she can be given only one Sunday off per month. In addition, the employer can calculate the amount of overtime in a 3-year frame. This can lead to a situation in which an employee is paid many months after his or her overtime.

Thousands of people attended the main protest against this law in Budapest on Saturday. Were there also protests outside of the capital, for example in industrial towns?

There was one smaller protest in Debrecen which is the future site of the BMW car company, and there was a road block in Veszprém. After the weekend more protests are planned in Pécs and Győr; the homes of the Audi car company and its suppliers.

What will be the consequences of the new law in view of the current working conditions, and especially for working time for Hungarian workers in the metal and retail sectors?

The expansion in the working time frame affects mainly the sectors you have mentioned as well as the transport and chemical sectors. We are afraid that the 400 hours of overtime will result in more accidents and will also have a negative effect on the employees’ life-work balance.

Did this anti-worker law come as a surprise to you from the point of view of Orban´s government policies? How has Orban tried to keep the support of workers?

Since the passing of the new Labour Code of 2012 which worsened the situation of employees and made the work of trade unions harder, we wouldn’t say we are surprised that the government demands even more flexibility from workers. It is also common practice that there are no consultations with the social partners before such important legislation is proposed. In this case, the amendment of the Labour Code has been put forward as an individual motion by two government party MPs. Therefore, it does not require the necessary consultation process, and can simply go directly to parliamentary discussion and adoption.

On the one hand, Orbán is using populism and demagogy to keep up the workers’ support, such as blaming migrants, refugees or the EU for Hungary’s problems. On the other hand, the government significantly raised the minimum wage in 2016, and also guaranteed minimum wage for skilled workers doing skilled work, which in turn pushed wages upward. However, Hungarian wages still lag behind regional wages.

What unions or other organisations or informal initiatives have been involved in organising yesterday´s demonstration?

The demonstration was organised by the Hungarian Trade Union Confederation, and all other four trade union confederations joined and supported the protest. All opposition parties were there and a new initiative – University Students’ Trade Union – was there with more than a hundred people and promoted solidarity between workers and students.

On the one hand there is the Western critique of the illiberal government in Hungary, on the other hand Western companies have happily made use of Hungarian „cheap labour“. What has been the role of employers in this proposed change to the Labour Code? The employers – including the German-Hungarian Chamber of Industry and Commerce – have been denying having any role.

We don’t have any accurate information but as this amendment is only beneficial for the employers and not for the employees, we are suspecting that this proposal is coming from the bigger employers in Hungary. A lot of people are thinking about the role of the German automotive companies in this proposal, but as you are saying, they deny having.

There can be a connection in terms of having more control over more areas in society. There is also at least one significant similarity between the issue of students and workers; in both cases the government makes amendments and legislation without any proper consultations with those who are affected.

As for a worker-student alliance, we are already in contact, we have had several joint meetings and are thinking about possible ways of cooperation.

What are your plans now?

We are continuing the protests with road blocks, and strikes are also under consideration in the near future and in different sectors.

Balázs Bábel, member of the executive board of the Youth Committee of the Hungarian Trade Union Confederation (delegated by Vasas, Hungarian Metalworkers’ Federation)