Against the Logistics of Exploitation// Presentation (Stockholm Meeting, Nov 23-25) 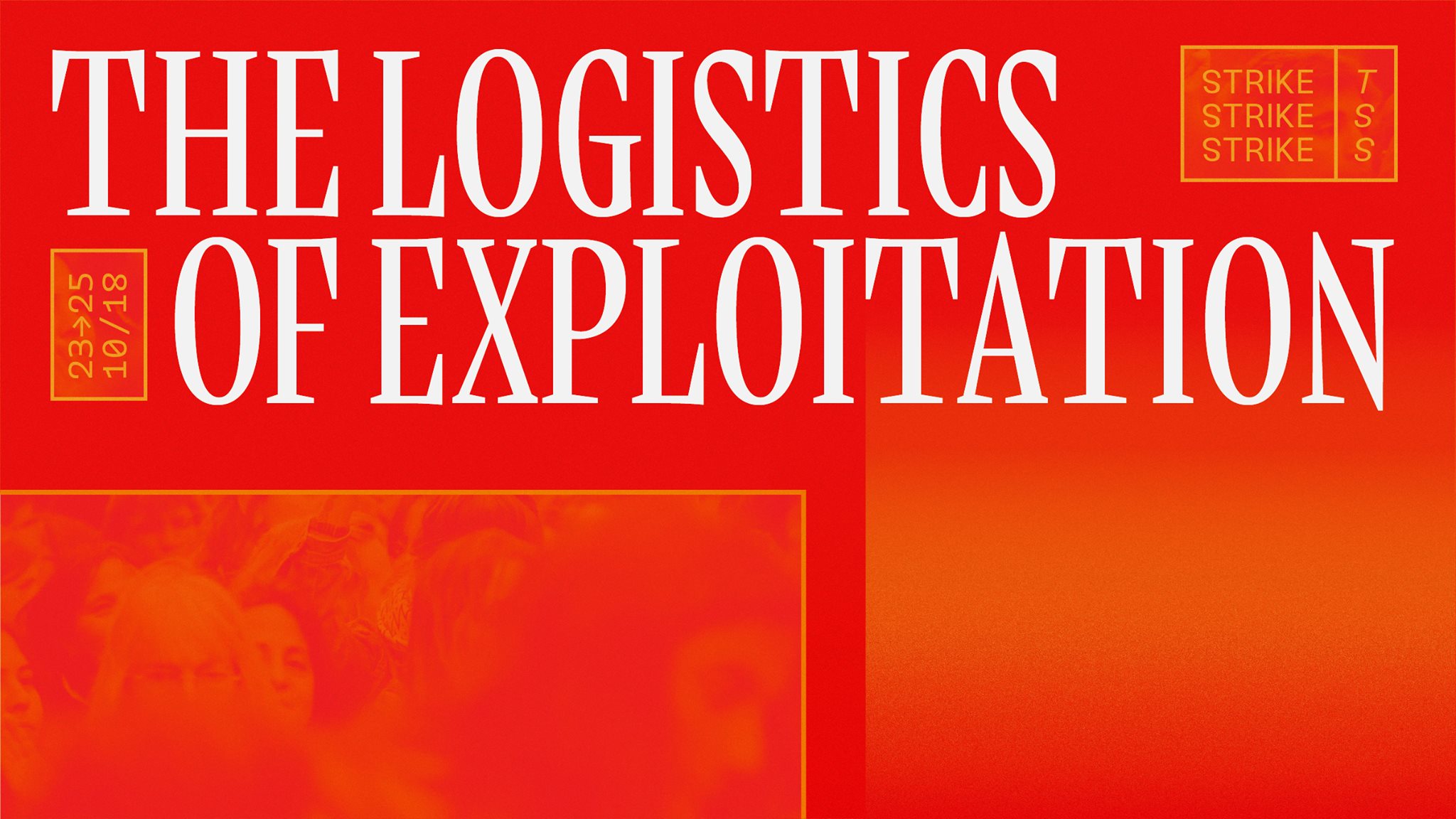 Over the weekend of November 23rd-25th, 2018, the Transnational Social Strike Platform (TSS) calls workers, union members and activists from across Europe and beyond to meet in Stockholm to discuss how to organize against logistical command over labor. We call logistical command a set of transformations that interests the whole world, changing economies, political geographies and the functioning of society and institutions. As logistics is one of the main forces that affects the capacity of workers and migrants to organize and win, a new assessment of the situation in which we act is needed in order to increase the capacity of our struggles: logistics is a battlefield we need to understand and practice if we want to reverse today’s power relations.

Two are the intertwined dimensions of this logistical command we want to focus on. The first one concerns the material connections that tie together production sites across the globe:  what happens in one spot of the chains of production and distribution affects the other spots. Multinational companies, international subcontracting, posting of workers, outsourcing, privatizations of formerly public enterprises: all these processes place each workplace, factory, warehouse, construction site into a wider and interconnected network. Moreover, the development of international infrastructural projects such as The New Silk Road, creating material, economic and political links between China and Europe throughout Central Asia, pushes us to come to terms with the coexistence of a wildly differentiated situation in terms of working conditions and organizing practices. The second one concerns the fact that such transformations are strictly connected to a politics of regulations of labor and government of mobility that affects every place, albeit in different ways, producing both interdependency and fragmentation.

Logistics is first and foremost the transnational organization of labor we need to confront. This organization has produced in the last years new seedbeds of struggles: sensible points to be disrupted, new concentration of labor force in strategic nodes, new strike waves and connections between migrant and native workers. At the same time, logistics responds to conflict by isolating, fragmenting and weakening the possibility for a collective rebellion against exploitation and its conditions. We thus need to elaborate a clear picture of the ways in which the logistical management of labor acts in order not to make our struggles be just temporary, isolated and predictable setbacks in the gears of this transnational engine. While struggles are too often confined to single industrial categories and based at the national level, company and bosses benefit from different national labor laws and wage differentials and “delocalization” effects are played out in each locality through outsourcing, the multiplication of employment forms and the hiring of blackmailed precarious and migrant labor. At the same time, an increasing mobility of workers across labor sectors and borders reveals a workers’ use of this very mobility against the pretension of logistical command.

We witness a reality of widespread but scattered forms of insubordination to logistical command, which shows the possibility of its rejection. But all this calls for new forms of organization and requires overcoming the narrowness of sectorial disputes and the limits of the present forms of union organizing and activist solidarity, especially in terms of transnational connections and efficacy of the strikes: while nationalist discourses divide workers leaving capital’s rule undisturbed, we need to surpass the idea that a national dimension of struggle can keep up with the attack of logistical command. The case of this summer’s Amazon strike launched from Spain and then taken up by warehouses across Europe, is a concrete example of the necessity to build on existing insubordinations to develop struggles that are transnational from their start.

But the impact of logistical command does not simply concern the way in which labor is organized across the borders. The reorganization of production has been paired everywhere with reforms and policies that cut welfare benefits, erase previous conquests, govern the mobility of migrants from within and without the EU.  Reforms such as Hartz IV in Germany, the Jobs Act in Italy, the Loi Travail and Ordonnances in France, regulations against the right to strike and to cut welfare benefits are good examples in this regard. Even the heralded “social” and “anti-European” measures taken up by right-wing governments throughout Europe – as in the case of Italy – are only apparently against this flow and both reinforce logistical command, the conditions of subordination of workers and foster fragmentation. Our hypothesis is that the logistical transformation only works if it is supported by certain kinds of policies, by now widespread throughout the globe, that have the general effect to constrain workers to work at whatever condition, to fragment them and to weaken their capacity to advance any collective claim.

Sweden – where we decided to hold our next meeting – is emblematic in this regard: the recent law proposal intending to make most forms of strike illegal, cripples workers’ influence in a way that is unmatched in Swedish history. The restriction of the right to strike is directly aimed against workers in the logistics sector, crucial for a strongly internationalized economy as the Swedish one. Even in a country where the social democratic compromise seemed strong and stable, the impact of logistics and neoliberal policies is hitting hard. In response to this attack, the Strike Back movement has successfully been launched, producing a strong convergence of energies. While the law might be anyhow enforced, the challenge is now to elaborate new strategies to counteract its effects. As already in the movement against the loi travail in France, one of such strategies is the recognition and establishment of transnational connections and a re-centering of transnational solidarity and wider political connections in the conflict practices of domestic workers.

Connected to this, we think that the outburst of institutional racism and of the bloody legislations on migration has only apparently the sole aim of keeping migrants outside the borders of the EU or specific countries: on the contrary, it is also aimed at setting up a space where workers can move regularly only when they are required to and are available to work no matter how and under the blackmail of institutional racism. The recent agreement in Germany for a new selective immigration law is a stark example in this regard. But institutional racism takes different forms across Europe, from pro-European policies to violent nationalism : if the first follows the logistical fantasy of a fully governed mobility, the latter reinforces exploitation through the criminalization of migrants. It is important to recognize that both options are violent answers to the widespread rise of social insecurity and the forms of insubordination of workers and migrants. Moreover, despite these attempts the massive movements of migrants are what in principle puts the logistics management of labor into crisis, because it is uncontrollable, it doesn’t fit in the gears. The mass migrants’ caravan crossing Mexico directed to the United States and the never ending strike against the borders along the so called Balkan route are two visible examples of the global struggle of migrants against logistical command. But this struggle emerges everywhere migrants fight against institutional racism and the attempt of making them politically silent, such as in the case of the Afghans’ strike in Sweden.

Confronted with all of this we believe that the possibility to reclaim national governments to fight against logistical command on the side of workers is out of time. This poses the crucial questions of what kind of political claims we can fight for in this situation, and what kind of political dimension we need to consider if we want to be effective. As TSS, we insist that the transnational dimension is the only viable option. This has to do both with the existence of global supply chains, and the existence of global conditions in each and every place. We do not deny that positive examples have been able to obtain partial victories. But we think the times requires a radical reinvention of forms of organization, discourses and aims in order to point towards a transformation of the present. The question is in front of us of how do we build connections that turn differences in a collective and transnational political force against the fragmentation produced by logistical command.

Our meeting has thus a practical political aim: to materialize connections both in spatial and political terms. We want to overcome the idea that labor disputes, migrant struggles and struggle over welfare and social benefits are separated fields, and to imagine unprecedented connections recognizing the fact that nationalism and racism against migrants are directly used by logistics to produce hierarchies, organize labor and make higher profits. For this reason, we seek to bring together those who have taken part in disputes against logistical command across and beyond the European space. We are aware of the profound imbalances on which logistical networks feed:  we see the difference of conditions between, say, places such as Sweden or Georgia, Italy or Poland. However, inspired by the global women’s strike that in the last two years has unleashed the potential and the novelty of a global practice of the strike, we want to focus on how to cope with these differences and how to lift the obstacles we meet when imagining the possibility of connecting existing struggles and organizing wider ones confronting the logistics of exploitation.

We take up the challenge of rooting our strategies from within these different landscapes of existing and potential insubordination, in order to develop a political infrastructure that does not privilege certain models of labor organizing over others, eventually reproducing those same hierarchies we seek to fight. For these reasons, our meeting proposes to be a space of encounter of different realities from which to continue and enlarge a process of confrontation and composition of demands and actions against the logistics of exploitation. The meeting in Stockholm will be a crucial step in the construction, independently from any kind of connection with institutional politics, of the political infrastructure we need. 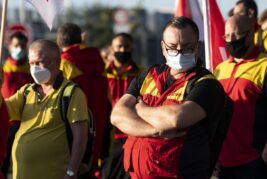 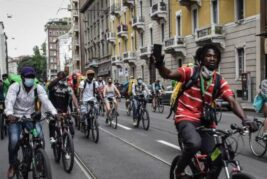 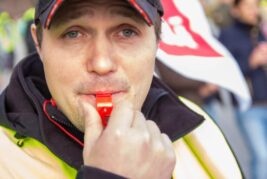