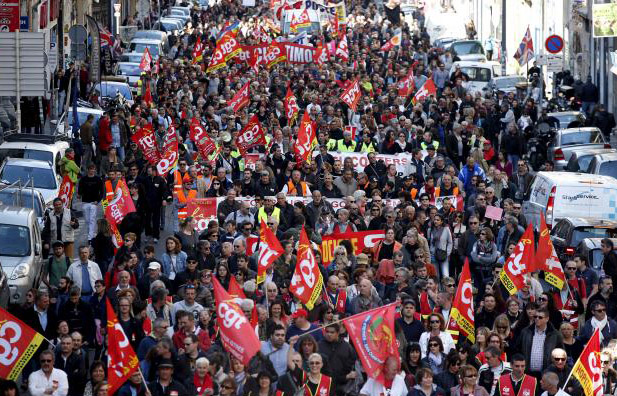 The social strike movement that two years ago fought against the Loi Travail and its world is taking to the streets of France again in a wide and articulated form. After all, Macron’s neoliberal politics now aims to realize what was heralded in the Loi Travail. Proceeding by decrees and passing parliamentary discussion over, Macron is not simply attacking this or that job, but his aim is to achieve a violent reorganisation of French society as a whole. The already announced reforms of television, public radio, asylum and immigration, pensions, general taxation, public function, popular housing, agriculture and alimentation, unemployment, professional training and education, all bear the mark of this process.

Macron’s neoliberal offensive could not pass unnoticed. The first mobilizations against Macron’s ordinances began the last autumn. Then on the 22nd of March, there has been a huge strike of the public sector and of the railway workers to respond to the president’s attempt to open to competition the society that manages the French railways, SNCF. By doing so, he meant to anticipate the deadline enforced by the European regulations, which impose the liberalization of the high-speed railroad lines from 2020 and of all public railroad lines within 2023, with some minor exceptions. Macron’s project envisages the transformation of the SNCF in a kind of joint-stock company, leading it towards a progressive privatization which reminds what has already happened with the much smaller Greek company Trainose after the Troika’s intervention. This goes hand in hand with the attempt to abolish the Railway Workers’ Statue, including also the cheminots – the railway workers – and more generally the public sector workers into the flexibilization and precarization regime that by now floods the entire labor market. As the French workers immediately understood, the problem is neither the defense of the public sector, nor the industrial plan of a big company, but mainly the future material possibilities to defend one’s own living conditions even more than the working conditions themselves. In other words, at stake there is the refusal of a model of society which deprives both women and men of the power of autonomously determining their own existence.

An even stronger answer took place on the 3rd of April, when the energy sector workers, the garbage collectors, Air France and Carrefour workers, hospital workers, retired people and many students from high schools and universities, who were already fighting against the so called “Parcoursup” (entry tests), all joined the strike of railway workers. This is how the industrial strike has become a metropolitan one in several French cities, thanks to the peculiar pace and contemporaneity of the different strikes – just like the one of migrant workers which led to the regularization of 160 sans papiers a few days ago, or the forthcoming strike of precarious teachers – and thanks to students’ activism which led to the occupation of Paris VIII and Tolbiac in Paris, Jean Jeaures University in Toulouse, Paul Valery in Montpellier and to a tight schedule of national demonstrations for the months to come. With dozens of occupations and 1000 people-strong assemblies currently taking place all over France, an exceptional wave of university mobilization is asserting itself again.

The strength of the social strike movement consists in its capacity to go beyond the demands of single working sectors.

These strikes do not intend to defend the “works”, as Macron’s propaganda would like us to believe in order to label actual working conditions as out-dated privileges. Everyone has a specific reason to interrupt production and reproduction – garbage collectors ask for a national service of garbage collection and more stable and homogeneous contractual and salary conditions, Air France workers claim for a salary increase, public and service workers ask for a common statute, Carrefour workers protest against the exorbitant personnel cuts, students contest the introduction of entry tests – but all of them take to the streets together to build connections, to assert a common strength, knowing that in order to face a systematic and global attack which pretends to reshape society as a whole, it is completely inadequate to limit oneselves to single disputes. Even though Macron has cunningly tried to divide workers by multiplying the disputes for each sector, the answer coming from the streets shows that the strategy of the leader of “En Marche” has been perfectly understood: the alliance of the workers from the public sector alongside the private and sanitary ones, together with the students represents a march in the opposite direction to the one expected by Macron.

It’s undoubtedly too early to foresee the direction the movement will take: many mobilizations are scheduled for the next two months (18-19, 23-24, 28-29 of April to begin with) and we will see if they will be effectively able to give continuity to this strike movement, overcoming the limits faced during the massive mobilization against the Loi Travail and its world two years ago. The past experiences, especially in France, show that the growth of the strike movement cannot be measured only by the presence in the streets or the extension of the interruption of work to new categories, but also by its ability to project itself on the transnational level.

The urgency to push these struggles beyond national borders is not the affirmation of an abstract principle. It is necessary to grasp at least the European and global dimension of a neoliberal restructuring that doesn’t seem to ever reach its limit, that is always in search of further sectors to precarize and new countries to impose as successful models, that is always able to identify new enemies, as it happens today with migrants, fostering a society in which everyone must fear the competition of the other. It is exactly for this reason that we must be clear: today in France there isn’t a French model to be defended, but a transnational front to be built. The question is not to let our enemies define our priorities, but to choose day after day whom we want to build our world with.

The challenge is open, in France as in Europe and beyond!