Freedom of movement, freedom from violence! 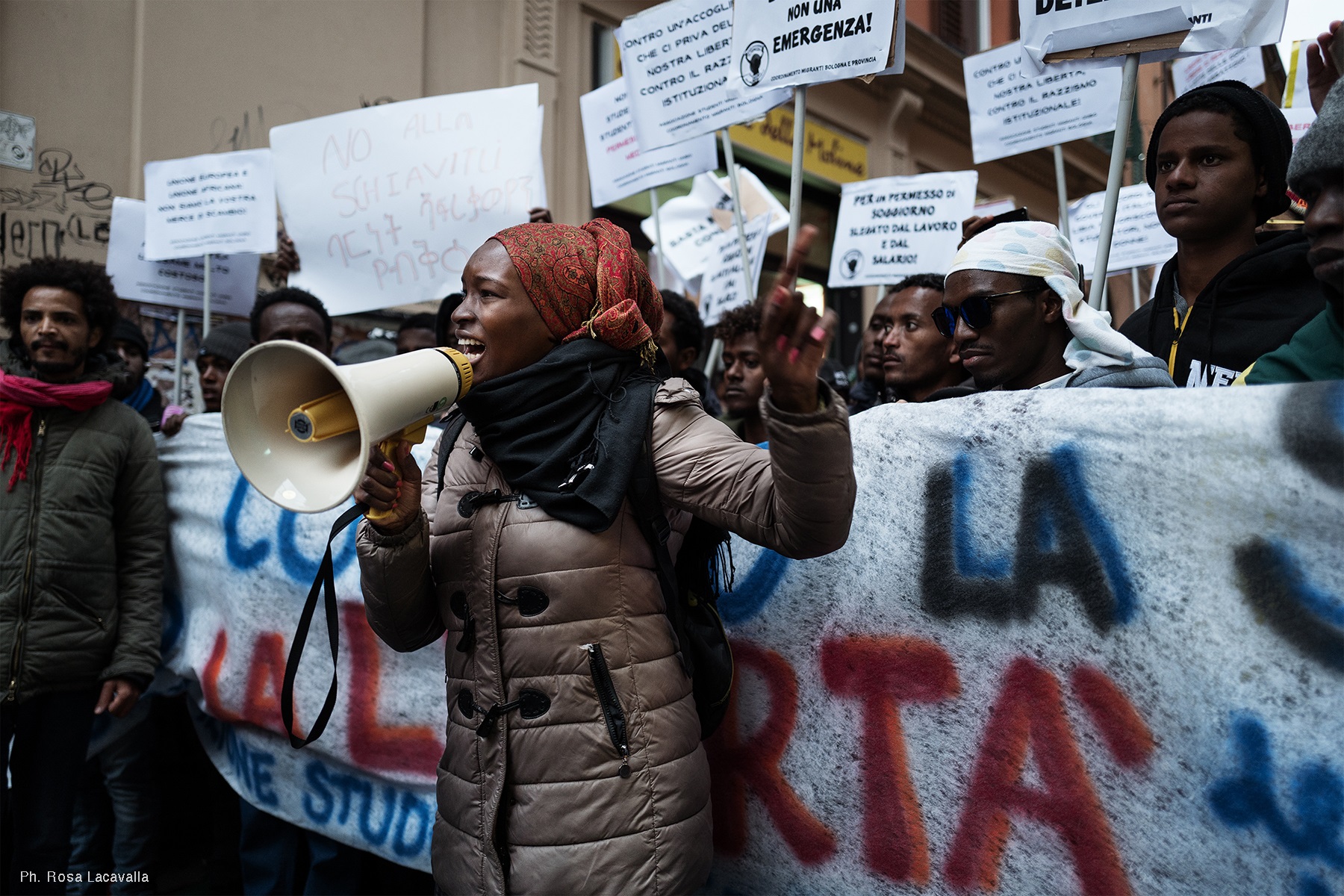 We publish a text written by some migrant women – students and workers, refugees and asylum seekers – after the demonstration against slavery and against Italo-Libyan agreements that took place in Bologna, Italy, on the 2nd of December 2017.The article focuses on migrant women’s conditions and their daily struggle for freedom. Starting from different positions and stories, the article aims at giving collective force to single struggles and experiences, thus rejecting those divisions and hierarchies imposed by institutional racism. Our challenge is to connect with the struggles carried on by migrant women and give them resonance and visibility in the path towards the global women’s strike on the 8th of March: their struggle for freedom is our struggle.

On the 2nd of December we migrant women took again to the streets to make our voices heard. We demonstrated against slavery and the Italian-Libyan agreements, because what happened is unacceptable. We demonstrated because the violence we face in Libya chases us throughout our journey and continues in Europe. We raised our voice against a situation affecting women even more brutally and turning our journey to freedom into a war against us. To get here we fought and, without ever stopping, on the 2nd December we took to the streets to fight again.

We took the megaphone because we have many things to say. Each of us struggles every day to obtain and maintain a residence permit and to pursue her own goals. Every day we are faced with expressions of surprise by those who discover that we have ambitions and projects,  those who talk about “good integration”. They do not know that we conquered everything we have thanks to our own strength, we won against those who presume to make decisions over us. This is all too often invisible and it is time to bring it to light. On the 8th of March many of us were on the streets with thousands of other women, including migrants, to claim freedom. Nevertheless, we still have a lot more to say: there is still a collective struggle to carry on and a space opened up for this struggle on the 2nd of December.

In the university and in workplaces, in front of the territorial commissions and in the reception centers, being women and migrants means facing different forms of violence. Violence hits all of us as women, but, as migrants, the racism of borders, of residence permits, of police officers, of the reception system, of institutions, forces us into a state of isolation, where we are alone in facing and overcoming fear. In Libya this violence takes on the most brutal form: the form of rape, whose consequence, sometimes, are the children who arrive with us. It is the high price we are forced to pay to cross the border and reach the freedom we strive for. The migration choice is already our assertion about a freedom which is denied to us and we have to gain. Our whole journey is a struggle for freedom, against those who presume to determine our life or to have our body at their disposal. But violence continues even when we arrive in Europe.

Those of us who arrive as refugees have to deal with territorial commissions which do not listen to our stories. Many times in the commissions there is no female member, and often no translator. Our stories of violence are dismissed as “cunning imaginative plot” by male commissioners who know nothing about our condition and the situation in our countries of origin. One of us, after telling her own story, was asked: “do you think you’re clever?” We will answer you here: not only do we think so, but we are. Perhaps some people are astonished or answer to our stories with racism because they cannot believe we are still here after crossing Libia or other borders, after experiencing interrogations and repatriation centers. It may be hard to believe we have not given up, but trust us: we will stay and will not stop.

Many of us left to escape from the control of the family. We held on when they tried to control us by means of rape and violence, border police, committee interrogations. Should we accept now the control of the safe houses, where they treat us like kids, they give us timetables, rules and false protection? We left to save ourselves from a fate we did not accept. We do not look for protection, we immediately want a residence permit to be free, to determine our future.

On our way, we also find the astonishment of the operators in many help centers. They are surprised to find out that we studied in Africa and that, once we receive asylum after many years of waiting, we want to enroll in university. We spot the same astonishment in the university halls and on the faces of our white colleagues. They are always careful not to say or do something “racist”, but then they are surprised when we get good grades and they assume that professors are more sympathetic towards foreigners. In the workplace, no matter if we have a degree or not, it is too often assumed that we are the maids, the janitors, the carers, the cleaning ladies. Even if we have other ambitions, we do these jobs in order to be independent, to get a residence permit in a country where there is no choice for migrant women: freedom depends on a scrap of paper that ties us down to certain jobs, or to husbands and fathers when we arrive through family reunification.

Many of us feel reasonably proud to do these jobs, because they allow us to be autonomous. Nevertheless, they often become an identity sewed up on our skin. Even when we are nurses, psychologists, history scholars, people mistake us for cleaners. It is not just “vulgar racism”, but rather the condition imposed on us by institutions: they blackmail us through the residence permit, the refusals – and consequent appeals against commissions -, the down-skilling of our qualifications on the labour market, where our “colour” makes the real difference in our curricula.

Many times, as we walk down the street, we are offered money and we are treated as prostitutes. This is what is expected of a black woman going around alone. For many of us, prostitution is a forced condition, while for others it is a choice. In every case, the fear and the blackmail of the permit hinder us daily and prevent us from building our future. We left because we do not want to do what society imposes on us, namely being mothers and wives at all costs. We want to be “weird”, as our communities often define us when we act as “bad girls”, that is to say when we simply choose to be free. The tie with the community is often yet another control form, it is a blackmail very difficult to overcome even for women who want to break its rules. It sounds crazy to us that, when we choose about our lives, we are told “do you believe you are white?”

Indeed, we are aware that many white women face the blackmail of precarity, the violence at home, in the workplace and on the street. Even if we experience very different conditions, as migrant women we refuse to be definitely divided by the categories of “white” and “black”, hindering us from doing the only thing we should do now: fight together against a violence wanting to humiliate us, in order to “put us in our place” and reduce us to silence. Even the blackmail of the residence permit is a form of violence against women: it forces us to choose between being servants or prostitutes, between family and exploitation. Fighting for the residence permit means fighting for the freedom from violence for all women.

We are challenging the many coercive authorities – from family to Italian and European governments, up to volunteers of good or bad reception, but we must turn our individual struggles and the courage with which we faced our journey – into a collective struggle, to overcome fear.