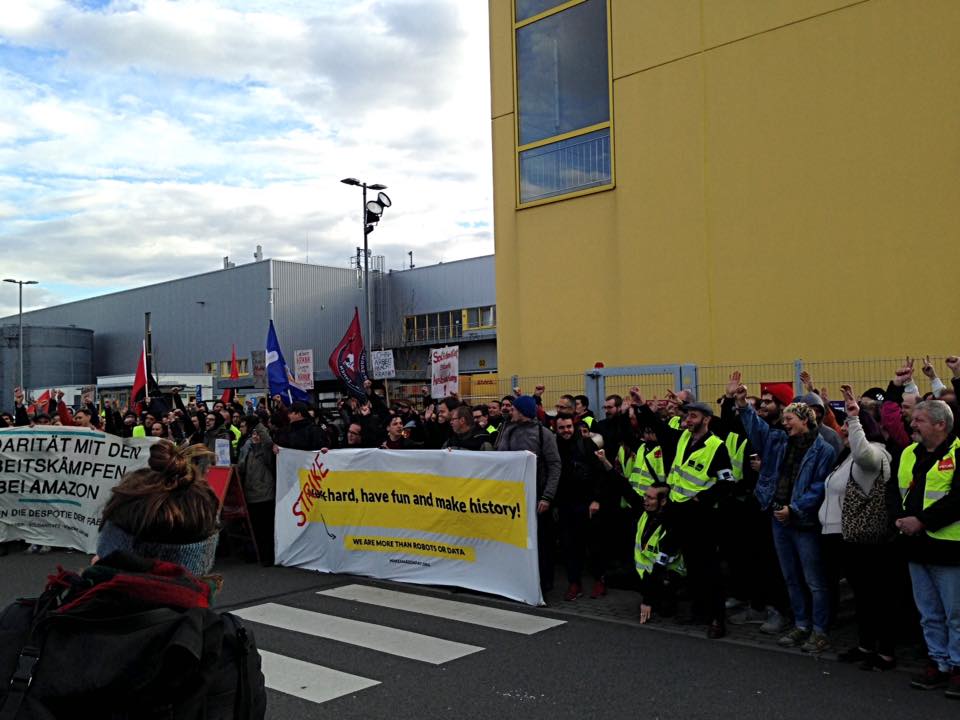 As the Transnational Social Strike (TSS) platform we look forward to the outcome of the strikes and the coordinated actions under the banner “Make Amazon Pay” planned for today November 24th, so-called “Black Friday”, that are happening in several European locations. As we wrote in our publication Logistics and the TSS, we recognise that logistics poses an unavoidable political challenge to any movement aiming to resist and overturn the present conditions of exploitation.

Amazon is a global colossus, but it’s not an unbeatable giant. This Black Friday will be different to previous ones for Amazon. It’s vast transnational network of exploitation will be opposed by a transnationally networked strike. Amazon makes money globally, but pays workers locally, acting as the good guy in the room of international development and investment. But against the low wages, the increased working time and rhythms, the exasperation and exhaustion suffered by its workforce, Amazon workers in different European countries are already on strike in order to show their reluctance to submit to this reality.

The initiative “Make Amazon Pay” will give visibility to this reluctance and to workers’ own insubordination beyond the spatial dislocation and trade-union affiliations. These actions build upon years of struggles that have seen the first European strike inside an Amazon warehouse in Germany in 2013. The cross-border dimension of today’s initiatives transposes the attempt to coordinate struggles between Germany, Poland and France by means of transnational meetings, some of which were hosted as part of past TSS meetings. Organized independently from the “Make Amazon Pay” initiative, the Amazon warehouse in Piacenza, Italy, are also experiencing a first-time strike of 4,000 workers, aiming at disrupting business as usual and demanding higher wages and slower working rhythms. In Germany, strikes are also happening across different warehouses. We know there are attempts to repress the political dimension of strikes, but the strikes in Piacenza and in Germany demonstrates a growing pressure among workers and a growing realisation of their leverage whilst Amazon CEO rhetoric claims to accommodate demands from trade unions in Europe.

To please its customers and discourage its workers, Amazon is keen to say that it will manage any disruption thanks to its European network. We don’t know in reality if this would hold true. We know that the managers show to workers that they should pride themselves in receiving the highest wages in the logistic sector, the miserable benefits and supplementary welfare bestowed on the employees are lies for those who are on strike and want to make Amazon pay.

We also know the solidarity across the factory gates that now aims also at contesting the consumer-oriented ‘prime life’ model suggested by Amazon and that would have been unconceivable today, without the strikes and the experiences of blockades and support of the past years, in Amazon and beyond. From the “Blockupy meets Amazon” experience to the struggles of logistics in Northern Italy, the shared experiences on how to coordinate strikes inside and outside warehouses have been inspiring all our thinking on new forms of labour disputes and political action.

As TSS Platform we have been and are active part in the actions in Amazon factories and we will support workers’ initiatives against exploitation. We also extend our support to the riders of the gig-economy that are also on strike and demonstrating in several European cities. A sign that the circulation of struggles and strikes is enlarging in different branches of the logistics sector and are developing a form that poses wider political questions for workers struggle, organising and winning against transnational fragmentation and in dispersed workplaces.

The use of strike as a weapon against logistics means to undermine the logic of today’s capitalism, that necessitates in the first instance a capacity to go well beyond a specific sector. The fragmentation and extension of the work–day, the intensification of work–time through performance indicators, big data and other algorithmically managed forms of measurement techniques are commonly understood inside logistics that affect all types of labour and status, underpinned by a generalised process of precarity. By turning the fragmentations and isolations produced by contemporary forms of capital into connections and leverage, we can weaken and confront the basis of the command of capital on our labour.