Striking the Border. Migrants’ Daily Struggles from Ventimiglia to the World 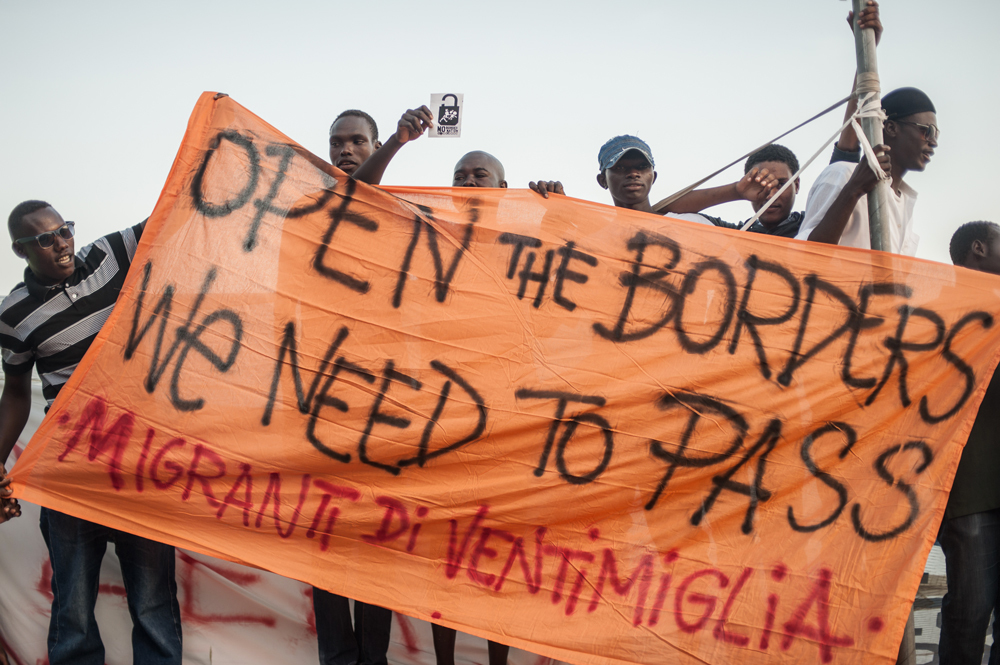 Starting from migrants’ experience in Ventimiglia, this contribution focuses not only on the violence of the borders regime, but also on the determination of migrants. The attempts to stop or limit their arrivals face their commitment to strike the border, to refuse the asylum system and the government of mobility that pretends to manage and filter migrants’ movement. The current attempts to “close the Mediterranean Sea” are to be conceived as a reaction to the protagonism of migrants. At the same time these attempts, made by the Italian government in line with European institutions and policies, open new challenges for those who struggle against the borders – both territorial and social –, since they increase denials and deportations, intensify hierarchies and differences among migrants, worsen social violence and racism. Migrants’ experience in Ventimiglia shows migrants’ movement as a daily social strike with a transnational resonance and remarks the political importance of a European Residence Permit without conditions as a tool to fight borders regime and precarity.

Italy, supported by the European Union, is committed to close once and for all the central Mediterranean route. In the meanwhile, its borders, both social and territorial, are the field on which not only violence but also struggles and insubordination keep on reproducing.

For several years the most visible tensions have been produced in Ventimiglia, on the coastal border with France, where more than six hundred migrants were still taken hostage in a constant transit last summer. A contradiction in terms that clearly shows the limits of the claim to block or fully govern the movements of migrants. Most of them come from Sudan – a country that, according to European agreements, has suddenly become, as most African countries, a “safe” place from where it is impossible to migrate. People who migrate are mostly the younger men, shebabs, although the number of women whohave reached the French border, with families or alone, has increased in the last few months. The continuous flow of migrants has been pushed ever farther from the center of the small town; the train station, the beach, the market and the public parks are constantly monitored by police forces, while the migrant camp is out of the sight of citizens and tourists, under a large road bridge. Here, below the Roja river, there are hundreds of camped migrants, lacking the basic livelihood; the infamous closure of the one and only access to water by the townhall of Ventimiglia forces them to drink or wash themselves in the river, with the risk of infection as a result. It often happens that many migrants are not just passing through Ventimiglia, but they are also spending several months in complete precarious conditions. S. Y. comes from Sudan and is 22 years old, fled from Darfur, spent eight months in a detention center in Libya and four in Ventimiglia. He says that he tried to cross the border for more than forty times and that he was systematically rejected by the French police even when he walked through hinterlandpaths. Arriving in Europe he was convinced that he could move freely to reach his brother in Paris and instead all his efforts are constantlyfrustrated by the police.

Racism, constantly fed and agitated by the institutions at all levels, persecutes and scares migrants, trying in this way to discourage the movements of hundreds of men and women,who have been marked by scars of torture in Libya and exhausted by endlesstrips. At the end of June – a period of continuous raids and deportations – the authorities announced the clearing out of the camp set on the banks of the river Roja.Facing this threat, a demonstration of more than 400 migrants and activists who are supporting them, took placeproceeding to France, clashing with the gendarmerie, who repressed it with tear gas. After the clearing of the camp, carried out with a bulldozer that crushed all the personal effects of migrants, many of them were stopped and deported. However, not only did the clearing outfailed, but some fifty migrants also succeeded in crossing the border with France. In the same way, the deportations continually fail to throw migrants out of the border and submit them to the regime of identification and expulsion. These are completely informal administrative procedures organized with the logistical support of the Identification and Expulsion Center in Taranto (in southern Italy), procedures that the Italian police is forced to repeat continuously because migrants keep onescaping its grip. Some of them have gone back to Ventimiglia dozens of times. In fact, deportation often does not take much longer than the journey to the south of Italy and the time of a forced identification. Deporting migrants by bus and airplanes has no other function than to move them from the French or Austrian borders to avoid diplomatic tensions – without success, given the militarization of the Brenner Pass carried outby Austria last summer.

The material conditions of the migrants hosted in the Red Cross camp, few hundred meters away from the Roja river, are better: it’s possible to have a meal, some water, a cot and some blankets. At the entrance of the Red Cross camp there is, however, a Police Office equipped with a fingerprint scanner. In line with the Dublin agreements, once the migrants are identified in Italy, they lose the opportunity to apply for the political asylum in other countries. That explains why many of them preferred to camp by the river, fighting against a reception system that ends up forcing them to stay in Italy and prevents them from being free to choose where to go. On the other hand, for those who are staying in the Red Cross camp the end of the war with the European military forces is a relief. M., for example, shows his new residency permit, he is visibly excited and he tells everybody his future projects: he has just found out that he has been assigned to go to Turin and he seems very happy when he finds out that it is not by the sea. Compared with the stifling certainty of the war and with the violence of the Libyan camps, even the precarious conditions ensured by a residency permit granted for humanitarian reasons and only for a given period, offers the possibility to move freely. In any case, the policy has to force migrants into the “official” reception system in order to reduce and control their movements.

This explains why the police raids, the ongoing sweeps on the trains, in the dormitory areas and of the “escape paths” are a daily occurrence in Ventimiglia. Against all this, migrants are resisting with the support of some organizations: men and women who fight alongside migrants against institutional racism, both lay and religious associations who have been for the last two years at the center of institutional attacks, often carried out in the form of expulsion orders. A City Council’s ordinance, repealed just in the last months, forbade to every organization or even private citizen external to the Red Cross and to the Civil Protection, to give food to the migrants. In a context like the one of Ventimiglia, to side with the migrants means to contribute to create the human conditions of their individual and collective fights to achieve freedom of movement in Europe. Among those who form an international solidarity network, the 20k collective and the Sconfinamenti network have been overseeing the border providing documentary evidences of the violence exerted by the police, supporting the migrants in their political actions and in their daily needs. Recently a new area was opened to provide some basic facilities such as computers, electricity, some rooms as well as legal or psychological assistance.

Lately, the number of landings on the Italian coasts has decreased by 86% and migrants who arrived in Europe must and will struggle against more and more effective denials and repatriations. The government’s program is to reduce their number to be able to govern them more efficiently, requiring them to work in conditions, if possible, worse than those of the migrants who are already in Italy since years and without giving any guarantee that they could get a residency permit one day. This change will also have a strong impact on the Ventimiglia border, where the pressure of migrants towards France is decreasing. The importance of Ventimiglia’s experience – and the solidarity shown on that border – lies yet on the determination of migrants to oppose the systematic attempts, practiced by the police and the institutions, to isolate them and reduce them to silence. This protagonism created the conditions of a political communication between migrants about the essential resistance strategies– such as how to escape from dilations and raids, how to avoid contact with the police, how to use churches to refuge – but produced also important moments of collective voice.“This is not a demonstration”, some migrants said during a procession in June, “we are determined to cross the border. If the police block the road, we stop, but when the police will be gone, we will move on again”. Even in a situation of extreme difficulty as the Roja’s ghetto where migrants are living, there are assemblies, discussions and collective gatherings that, also thanks to the networks of solidarity, show the possibility of collective organization, able to put into question the daily violence of the government of Ventimiglia border and more generally of the borders regime. The challenge remains in fact the struggle against the regime of territorial and social borders, among which Ventimiglia is only one example, a struggle carried on by migrants that must be put forward. We have to mobilize to break migrants’ isolation and to destroy the hierarchies, imposed by institutional racism in Italy and Europe in order to exploit them and to reduce them to silence. We have to establish political connections between very different conditions, starting from the claim of a European residence permit without conditions, which can give political voice to the strike against the borders daily practiced by migrants with their movements.