Report of the Transnational Day of Action against the Border Regime // 18.03.17 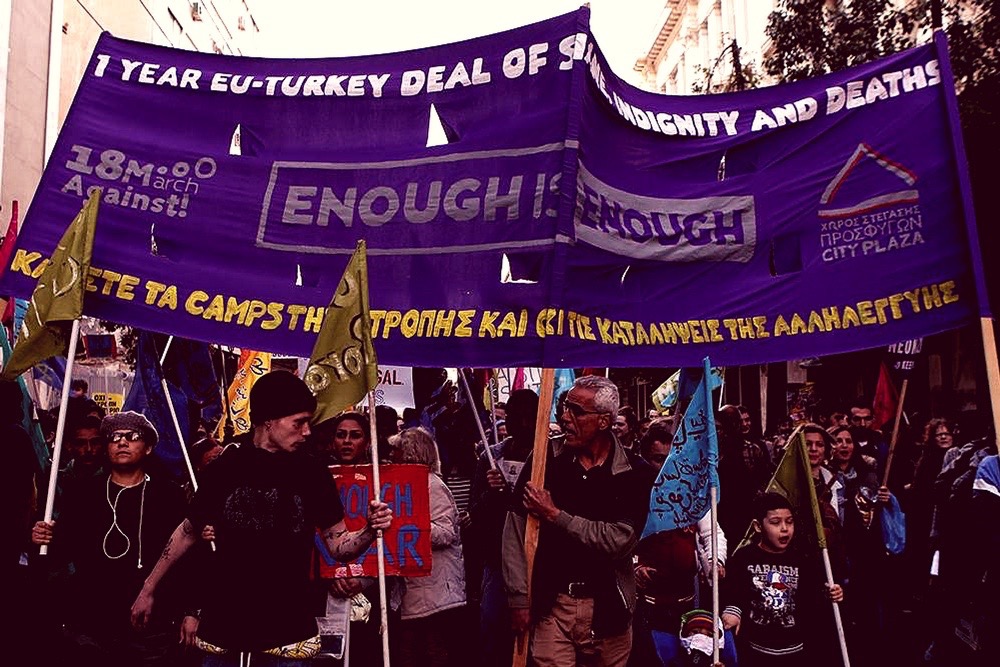 by HAGEN KOPP (No One is Illegal, Hanau)

The Conflict Corner of this week presents a report of the transnational day of action of March 18th, when protests and demonstrations took place in several cities all over Europe. The initial call came from groups in Greece, but more networks picked up the initiative and prepared actions according to their local conditions and ongoing struggles. Border regime and government of mobility limiting freedom of movement to regulate an increasingly exploited and precarious labour force have been a crucial target of the Transnational Social Strike Platform since the beginning. Migrants are in the front line of the struggles against precarity and European border regime, both inside and outside the workplaces, and they are constantly striking back against the conditions in which they are forced to live and to work. As a matter of fact the attempt to govern migrants’ mass movements and the general exploitation of workers are strongly interconnected and the differences of status, the hierarchies of conditions and the threat of deportation are used to create a cheap labour force under blackmail. The current challenge is to bring the local initiatives of solidarity a step further, in order to create bridges between different conditions of oppression and exploitation, to build connections between migrants and non-migrants starting from common terrains of struggle.

The original call-out was circulated last November by the Best hotel of Europe squat in Athens, which has been occupied by activists and refugees since April 2016:

In February 2017 an international call was launched as well:

«On the 18th of March, 2016 the EU signed as its dirty deal with Turkey in an attempt to externalize the Euro­pean borders, to use the Turkish regime as a watchdog to stop refugees from fleeing into EU countries. With active participation from the Greek government, the Greek-Turkish border region has been turned into a militarized buffer zone for the deterrence, detention and deportation of refugees. This Deal is one piece of a puzzle in the authoritarian and racist policies which are being implemented in all European countries. On the 18th of March, 2015, the day the new European Central Bank building in Frankfurt was opened, a huge European movement protested against the austerity policies that the EU imposes on Europe and especially on the European periphery. Tens of thousands took to the streets to claim another Europe, a Europe of solidarity and struggle from below against exclusion, poverty and deprivation of social rights for locals and migrants.

Europe wages wars and at the same time strengthens its fortress against the refugees. The austerity regime in the EU and the repressive European border regime are sides of the same common goal of the European rulers: to stabilise their imperialist powers and the regime of exploitation». 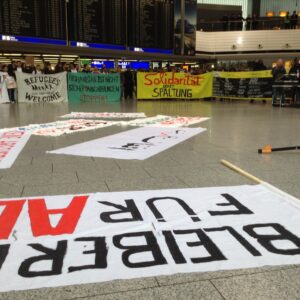 In Germany two interconnected networks picked up the initiative and started a decentralized mobilization for the same time. Welcome2Stay called for nationwide action days under the headline: «For the right to come, to go and to stay». They wrote:

«…The European system of exclusion is getting more and more brutal. Germany is going ahead with more and more deportations – Let us raise our voice together! Join the nationwide days of action from 18th to the 23rd of March for a right to stay and equal social rights for everyone. Show your solidarity, your struggles and your visions of a society in which migration does not pose a threat».

Under the banner of «Get together 2017»a Germany-wide alliance of local groups also joined the day of action to demand freedom of movement and the right to remain. This led to demonstrations in 10 German cities. London, Glasgow, Gernika, Paris, Zurich and Graz also saw demonstrations, along with a number of cities in Italy, partly framing already planned actions in the context of the new 18M-campaign.

What follows is a series of reports from some selected cities, mainly in Greece and Germany.

Athens: the biggest protest on 18.3.17 took place in the Greek capital, with up to 8000 participants and thus the biggest antiracist demonstration in the city since 2005:

«In Athens, the initiative for the organization of the 18M protest, through its common call and actions in camps, social spaces and workplaces, led to the biggest antiracist protest of the past few years. It is not a given that this was going to be achieved together by everyone involved. Over the past few years, we were divided into separate protests. City Plaza contributed to this (not on its own, of course) through its call for a common assembly for setting up the framework for the mobilization. This way, thousands of different mouths, thousands of different slogans in many different languages rallied against racism, war, poverty and fascism, against the EU-Turkey deal of shame. The participation of refugees from camps was very large, and sets an important precedent for ongoing struggles».

«The picture in cities across the country was similar. Over 19 demonstrations took place in the rest of Greece, on islands and cities, where refugees and locals created a big event that resonated throughout the country. The Panhellenic Network of Antiracist and Migrant Organizations contributed significantly to making this a nationwide event».

Mitilini: About 2000 refugees protested on the island of Lesvos, where, for the last year, they have faced a so-called hot spot system, threatening them with deportation back to Turkey and blocking their further route to the mainland of Greece.

Venice: On 19th of March some thousand people demonstrated for freedom of movement in Venice and also in some other Italian cities in the context of the transnational day of action.

In Catania a protest banner (“Freedom not Frontex – Open Borders”) was displayed outside the Frontex HQ: “in context of the action day of 18M we visited the Frontex office in Catania this morning. Here you also find Europol, EASO und Eunavfor Med, together they build the ´European Union Regional Task Force (EURTF)`.”

In Zurich an antiracist groups organized a big conference against restriction of movement and the confining of asylum seekers to underground bunkers as political policy. In the autonomous school about 400 participants discussed about concrete strategies of resistance and practices of solidarity, and together with inhabitants of the so-called emergency accommodations it was decided to mobilize for an action day against the camps (and in the Kanton of Zurich often bunkers) in May.

In three cities in Germany, in Frankfurt, Berlin and Munich, simultaneous protests took place inside airports as these places represent the policy of deportations.

Deportation-Airport No.1 – Frankfurt Airport: about 400 people from various countries of origin (mainly from Afghanistan, Ethiopia, Eritrea, Somalia) protested together in the two terminals and in front of the check-in of deportation airlines. From the call: «5452 people have been deported from Frankfurt airport in 2016, every day nearly 15 people. They have been deported into poverty and discrimination at the Balkans, into homelessness in Italy or into civil war in Afghanistan. More and more charter planes – first of all from Air Berlin – have been booked to bring the ´deportees` without publicity and if necessary by force out of the country. In the meantime, 110 times deportations in scheduled flights had to be stopped, when people resisted against their deportation».

«free of deportations, solidarity without borders»: about 250 people protested at the airport Berlin Schönefeld.

Between 100 and 200 people built tents on a central square (Rathausmarkt). Their central demand was «Take in 1000 refugees from Greece!»

About 600 people participated in a demonstration against the G20 meeting of the finance ministers in south-east of Germany.

The «Get together» network, composed by various local groups from all over Germany, is planning for a next step of transnational action days for freedom of movement and equal social rights. In reference to the historical «march of hope» in Hungary in 2015 they propose the first two weeks in September for decentralized activities. «Two years ago the march of hope started from the Keleti train station in Budapest and marched towards the North-West. These days have been crucial for the break through to open the borders on the Balkanroute. Let us create as much public attention as possible with manifold events and decentralized actions for the demand of freedom of movement for all! The beginning of September will be the right time to raise attention to this topic as the general elections (in Germany) will take place. We want to oppose the racist right-wing populists with occupying public spaces with our demands against deportations and exclusion and for open borders and solidarity». In the meanwhile «Get together» also decided for a «culminating» centralized mobilization to Berlin on 16th and 17th of September, one week before the elections in Germany. A big demonstration including a parade and political carnival is projected for these days.