This week we are (re)publishing an article in the conflict corner which focuses on another important sector of migrants’ exploitation, i.e. seasonal workers in agriculture. In 2013, Austrian union activists started a campaign in support of migrant workers struggles, many of them coming from Romania. The text is part of a brochure published after 3 years of campaigning. It describes the history, activities, goals, and obstacles of the «Sezonieri campaign» and also the first steps of its transnationalisation. In April 2017, the campaign will be restarted during asparagus harvest. Videoclips will be published (to inform both workers and the public), info-tours (in Austria and Romania) will be organised, and of course the organising/info work in the fields will be continued.

Autumn 2013: about 70 landworkers from Romania and Serbia decided to down tools in October. With the help of highly visible protest, they drew public attention to their unbearable working conditions. Over a month earlier, in August, Romanian and Hungarian landworkers had got in touch with the trade union PRO-GE in order to struggle against their exploitation. About a year later, the Sezonieri Campaign for harvest workers in Austria kicked off: «Sezonieri» stands for «seasonal worker» in Romanian. What does the campaign aspire to? Why has it become necessary to run this campaign? And what preliminary conclusions can be drawn from three years of campaigning work?

The examples of struggles for land workers’ rights raised above highlight what seems to be a widespread practice in this sector: wages being driven considerably below collective bargaining agreements, violations of legal maximum working hours, withholding of special allowances for overtime, accommodation of workers in substandard housing – partly under forceful conditions – raising the suspicion of the prevalence of human trafficking. All of that is happening right next door – in the realm of the production of our highly praised local vegetables. However, both earlier cited examples are somewhat striking, especially since these groups that fought for their rights are hardly being ascribed any ability to organise and struggle. To say the least, seasonal and harvest work range among the most precarious forms of migrant employment. Both cases underline that the enforcement of rights is possible, despite highly unfavourable conditions: in Burgenland the workers represented by PRO-GE reached a settlement agreement of more than a few thousand Euro. Likewise the other workers, represented by the Chamber of Labour, concluded an out of court agreement in which the employer in Tyrol guaranteed additional payments amounting to roughly 110.000 euro.

Harvest, seasonal work, and the labour market in agriculture

The legal constructs «harvest work» and «seasonal work» (described officially as «temporarily admitted foreign labour forces») are temporary work relations which do not offer any longterm perspective for employment. Harvesters and seasonal workers (from outside the EU) require work permits; their issuing of which is limited to regulated contingents specified for each federal state. Meanwhile the majority employed in agriculture are mainly (temporary) migrants and commuters originating from so-called new EU member states of Eastern and Southern Europe who, currently with the exception of Croatian nationals, benefit from free access to the labour market. During work-intense periods agriculture and forestry is the sector ranking highest with regardto the share of employees of migrant origin. According to official statistics 17.287 out of 29.697 persons employed in agriculture and forestry at the end of June 2015 did not hold Austrian citizenship. The situation is even more complex with regards to collective bargaining agreements. Depending on the federal state, as well as the type of business (farm, garden centre, winery etc.), different types of collective bargaining agreements apply. However, they all share a commonality: the legally binding – but in practice all too often violated – minimum wage for unskilled agricultural work is low, ranging from 6,70 to 7,30 euro gross – meaning prior to deduction of taxes and social insurance contributions. 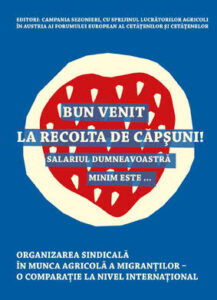 Thinking about agricultural politics and labour struggles together

Not only is Austria characterised by a vicious circle in agricultural production, price pressures generated by wholesale are pushing agricultural businesses to produce for less money, there is also little organised resistance, mainly initiated by small-scale actors. European and national agricultural policies are primarily about increasing cultivated land, however the disastrous price policy for agricultural products leads to a systematic over-exploitation of labour forces – be it of relatives working in the family enterprise, or of employees. Whereas large businesses manage to maximise profits by adopting this strategy, the smaller ones can hardly sustain their economic survival. Moreover, «organic» and «regional» production does not guarantee fair production. «Fair trade» is an established term when it comes to importing products from overseas, but such discussions are completely absent when turning to the apple of Styrian origin, radish from Tyrol, or grapes produced in Burgenland. The Sezonieri Campaign aims at addressing the inclusion of labour rights and anti-racist debates in the realm of agriculture and, conversely, at the inclusion of agricultural concerns in the sphere of trade union work.

The Sezonieri Campaign is a joint initiative run by a range of actors based within the trade union, migrant, and agricultural contexts. The main goal is to raise awareness about existing collective bargaining rights, labour and social law, as well as to offer support in enforcing these rights at the individual and collective levels. Secondly, the Sezonieri Campaign supports labour struggles and processes of self-organisation. Thirdly, the campaign aims at improving the living and working conditions of employees in the agricultural sector in significant and sustainable ways, rather than on a temporary basis.

We circulate information in a range of languages, offer a phone line, proactively get in touch with workers in the fields, campaign with large banners in the border regions, give legal advice and support, and do media work. The collaboration between members of trade unions, employees of NGO’s, and activists is crucial for our work. Although the diversity in organisational cultures and working styles may be challenging at times, it is precisely this mix in competences that makes this campaign successful. Being activists based in various social and anti-racist struggles, the Sezonieri Campaign represents a concrete practice of standing up against precarity and enabling a context that enhances our capacity to act in solidarity.

One and a half years after these 70 harvesters had pulled out of their workplaces in Tyrol, we visited some of them in their home district Sibiu, in Romania. We were interested in documenting, some time having passed, how they had fought for their rights and learning what conclusions they retrospectively drew. All warmly welcomed us; the reflection on this struggle however could not have been more different: some considered they had lost their chance to work in Austrian agriculture because of their militant reputation; this was considered problematic especially since they were facing economic hardship without any revenue from working abroad. Others were happy being finished with seasonal work and considered it a better choice to stay at home with their children. Some would advise others to stand up for wages and social rights anytime; others were reluctant to advise others to struggle since they considered it to be a great effort with an overall dissatisfying result. A more lengthy exchange with SorinOprișiu, who was involved at the frontlines of this protest is featured in this brochure. Two former harvest workers, who had filed a court case for another struggle (equally located in Tyrol), are now active members of the Sezonieri Campaign.

Throughout the campaign PRO-GE successfully managed to struggle for wage claims that were denied by employers (a harvester shares her ongoing case on page 19). In part, the campaign achieved further, but more indirect improvements – for instance through strengthening the negotiation powers of harvesters by providing legal information; or by raising public pressure and thereby forcing employers to give in to workers’ demands. Workers in agriculture are now using the knowledge disseminated as part of this campaign on minimum wages, maximum working hours etc. in order to achieve some punctual improvements in their work relations. But even so, challenges persist: our lack of competence in various languages creates occasional hurdles; we are facing the difficult tasks of building trust and continuous organisation in a sector characterised by the permanent movement of its workers; we have so far not found enough points of leverage to exercise pressure more systematically in order to move beyond successful singular case work and achieve enduring changes in work and social relations. Finally, the goal to create social spaces for, and supporting, the self-organisation of workers in trade unions is yet to be reached.

Welcome to the Strawberry Harvest…

Against this background we hosted a forum on trade unions, (migrant) agriculture work and unionising entitled «Welcome to the Strawberry Harvest! Your minimum Wage is…» at the end of May 2016. Throughout two days colleagues from trade union, activist, and agricultural backgrounds based in Germany, Ireland, Italy, Austria, and Switzerland exchanged experiences and discussed unionising work in agriculture. In order to analyse and compare challenges and strategies, and to learn from international best practice, we aim to share and spread this knowledge and a few contributions more in this brochure.

Download of the brochure in English, Romanian and German:

http://www.sezonieri.at/servlet/ContentServer?pagename=P01/Page/Index&n=P01_64.8
Activists of the Bulgarian grassrootunion ARSINDICAT (Autonomous Workers Union) have started translating it into Bulgarian: