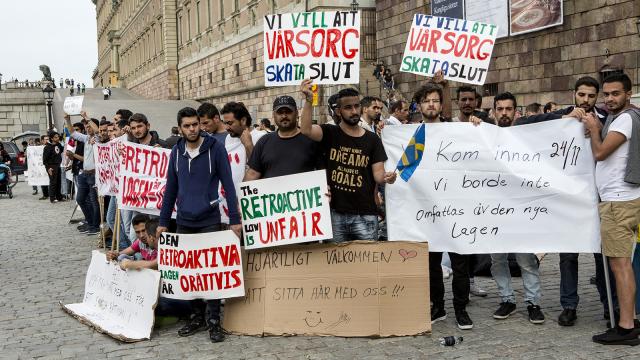 We continue the “conflict corner” this week with an analysis of some of the consequences and effects of the stricter immigration laws, passed by the Swedish parliament last year. Along with the increased economization of these legislative changes, in these last months the country has seen a large number of people have their hopes for the future shattered, especially because of the strict tie established between residence permit and employment. The counterforce to this development seems to be in the social sphere, especially in schools. The sense of identification, companionship, and community that this sphere offers at its best has allowed teachers and students to voice concerns more openly, and call for social justice. One of these conflicts is currently playing out at an upper secondary school in Stockholm, where the students are organizing a strike in solidarity with a fellow student facing the threat of being deported. The strike committee draws inspiration from earlier school strikes and blockades. These past experiences have convinced the students that this is the most effective and creative tool of protest to put pressure on things that – to a great extent – affect their daily lives.

In June last year, Swedish asylum laws were dramatically altered by parliament when they voted through a temporary decree, halting immigration to Sweden. The government argued that the country needed “breathing space” during what was labelled as a refugee crisis. Among other things, the new law meant that permanent residency permits is no longer obtainable. The new law stated that only temporary residency permits of a maximum 3 years could be granted to those who applied for asylum after November 24, 2015 – for unaccompanied minors, the time of application is not regarded. Restrictions for immigration of families has also been significantly minimized, and for someone who has been denied asylum in the past there would no longer be any economic support for temporary residents. The reforms have so far been expressed as temporary, but the opposition parties, including the right wing populist Sweden Democrats and the liberal conservative Moderaterna, demand that the changes become permanent. Finally, the new laws meant that any possibility of prolonged and/or permanent residency would be tied to employment. This stipulation quickly increased the employer’s authority and power over an employee; when the direct result of a dismissal is deportation, problems such as loss of wages, sexual harassment, and lack of work safety often comes in second place.

Campaigns, protests and criticism from human rights organizations, and appeals against the law, have been numerous during the last year. One of the biggest actions against it was held outside of parliament by and with asylum seekers, and lasted several days. We are now starting to see the consequences of the applied “breathing space”. Children and teenagers who have spent most of their years in Sweden are now suddenly being deported to “home countries” many of them have never been to.

These kids have been socialized in Sweden, they’ve gained new commonalities with classmates, play mates, teachers and friends. And vice versa. The forceful effect of this is visibly something to be reckoned with. For in the last couple of months, large scale mobilizations around specific cases have gone from a simmer to a boil, explicitly in schools. Teachers have gathered students and peers to protest, and written appeals on behalf of their students who are living under the threat of deportation. Solidarity events have been organized frequently by students. These protests have resulted in the government, albeit late, being forced to reconsider some of the policies regarding unaccompanied child refugees. It appears that it has been during and around school activities that strong collective feelings and mutualism have emerged. Authorities have not been able to ignore that the deported are simply singular individuals, with isolated fates. These events – and the pending deportation for tens of thousands of individuals – are by all indications enmeshed in the social sphere; even without mentioning the workfare politics surrounding them. The social spheres that people built up in their new countries are not interchangeable. Not without consequences. They entail a force, perhaps even a social counter power with the potential to significantly disrupt the system.

The students at GlobalaGymnasiet (the Global High school) in Stockholm are highly aware of this possibility. The 15th of February will be the day for a new school strike. In support of Jagaa (who is attending his last year at the school) and his family who are all at risk of deportation, 600 students between 16 to 18 years old will go on strike. Their family, of two adults and two children, has lived together in Sweden since 2010 on a working permit. When the father was supposed to renew his permit for the third time, he should have had a chance to get a permanent working permit, but his employer messed up. As a result, the family’s opportunity for residency was sabotaged. Afterwards, they applied for asylum, but with the strict new rules (and without proof of working documents), they had no room to maneuver and now they will be deported to Mongolia.

– Despite Mongolia being Jagaa’s“homeland” there is a risk he will be excluded because  having lived in Sweden for so many years, he does not speak the mother language very well and might have to attend elementary school. This will be even worse for his little brother who was born in Sweden and lived every since, explains Otto Boldemann and Jonathan Granlöf from the strike committee at the school.

They don’t doubt that this is the right direction to go. In the auditorium four successful assembly meetings have been held, and it even seems that other high schools in Stockholm will join the struggle.

– We hope of course that all the students will go on strike, we have had an assemblies to start organizing the strike and we have a petition on the internet with over 1500 signatures. This along with the engaged students at the school and in Stockholm show that support for the strike is huge. We don’t know if the teachers will participate, as it probably is illegal under their collective contract, but it would be welcomed. The strike is to highlight Jagaa’s case but also other similar cases. It is not a strike against the school as such.

In the past years Globalagymnasiet has arranged several strikes with the aim to bring to light different issues. In 2012 the students went on strike in solidarity with their teachers. After a rational analysis, they concluded that the new salary contracts would influence their schooling as it relates to their teachers’ working conditions.

– Yes, this is true. We have this kind of spirit at our school. For example, in 2012 we had a school strike with 400 students in support of the teachers’ situation, and in 2014 we made a blockade against SDU (The right wing populist party Swedish Democrats youth organisation).

The committee also seems to have been inspired by solidarity strikes in 2013 and 2014 organized at a high school in Gävle, a smaller city in Sweden.

– It has worked in the past, the school strike in Gävle in May 2013, in support of the hunger striking Afghan children and teenagers facing deportation, resulted in them being allowed to stay in Sweden. We believe and hope that we can impact this situation in the same way. The ideal scenario would be that Jagaa and his family are allowed to stay. We hope that his case will receive wide attention and that it affects the Migration Board’s decision. But we also want to humanize these types of cases as they are becoming increasingly common in Sweden, and where conflicts with employers shatter people’s lives and dreams.

The students are investing a lot of hope in the strike as a method to force concessions, and their great enthusiasm shines through when they talk about its possibilities to affect the current migrant regimes:

– We are in a political situation with increased skepticism towards immigrants and a government which takes a hard line in its migration policy. We believe that this kind of strike is even more important today when the public debate has changed. The reason why we went on strike is that it is a method that works. When you can’t make your voice heard in elections and are taken less seriously in administrative and political contexts because of your age, then the strike is a method of struggle that gives us the power to influence, something that society has not given us. We want to draw attention to the case as much as possible and instead of discussing with the immigration office behind closed doors, we want to show our support publicly and as powerfully as possible! Then this combination of strike and demonstration felt as the best way to go. We are happy about the activist spirit that exists at the school and obviously want as many people as possible to get involved in what they are passionate about but we are not striking for “the sake of striking”, we are doing it so that our friend Jagaa and others can stay in Sweden, explain Jonathan and Otto.

This case, and many with it, tells us that it is clear and plain that a large social network is contesting workfare politics as solution to the problem of integration, not only in Sweden but also in the whole EU. In this increasingly constrained system, only employment and employability are considered valuable by the government: you don’t have a job, you’re out of the safety net and furthermore, the country. But if integration is synonymous with work, why is it  that hundreds of teachers, friends and schoolmates are standing up and protesting, at all costs? Jagaa’s family may not fit into the narrow solution for everything that a neo-liberal agenda places in its formulation of problems, such as integration and refugee crisis. And therefore, they are now, after 7 years in Sweden, being expelled. But with this action the students at Globalagymnasiet show that the authorities’problem definition isn’t the only one. What the prevailing system considers priority is dismissed by this event. It is not through employability or benefits’entitlement that students value their relationships to one another. They highlight other needs and motives, another priority order which puts the social context, solidarity and the convergence of struggles first. And which, if denied, could be the beginning for an escalation of these conflicts.