Statement in support of the striking dockworkers in Sweden 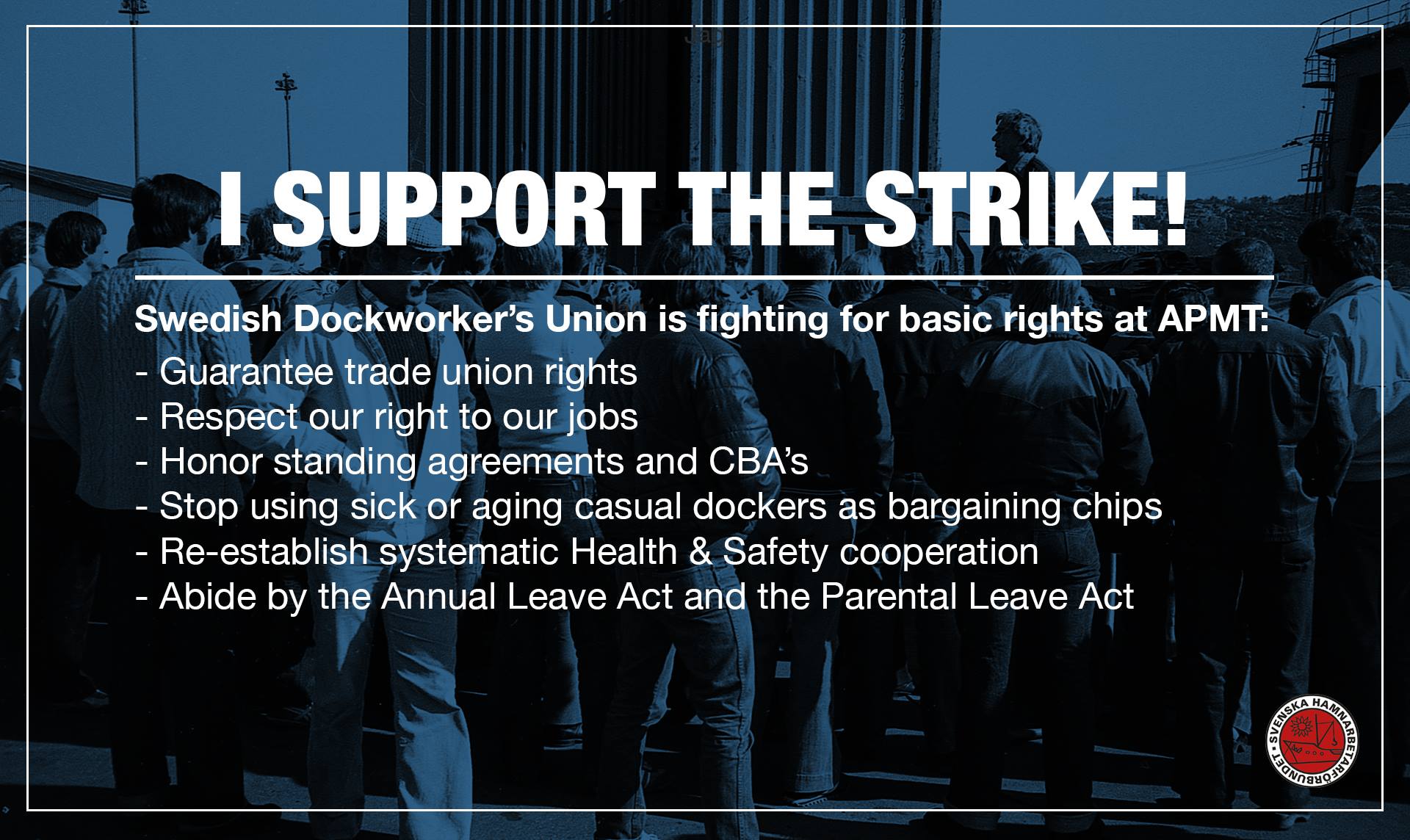 The Transnational Social Strike Platform supports the dockworkers that are striking and fighting in Gothenburg at APM container terminal. About a year ago, APM Terminals Gothenburg adopted a new aggressive personnel policy and is now rejecting all demands for higher wages and better conditions from the Swedish Dockworkers’ Union, which organizes 85 % of the dockworkers at the container terminal. As a reaction to the strikes, APM retreated from the negotiations considering working conditions and wage levels not its responsibility, while at the same time the national employers’ association Ports of Sweden declared that no positive solution can be found.

APM is a global player and its conduct in Gothenburg is led by calculations that go beyond the local conditions in the port. The container terminal is the biggest of this sort in Scandinavia, handling about 50% of all containers to and from the region. The port is key for the supply chain of the second truck maker in the world, Volvo, while earlier this year, the Japanese automaker Mazda signed an agreement to use the terminal for its import in Scandinavia. A whole regional economy is connected and in some extent dependent to the container terminals of the port. The growth of the port traffic is also leading to a growing interest of the real estate market in the region, including housing, infrastructure and logistics facilities.

As TSS, we point out that this new pressure on dockworkers is the result of different factors, including the development of value chains using the port and the financial investments in service industries and real estate in the whole region. As already happened in other ports and key infrastructure around the world, this dispute is thus far from being a delimited industrial dispute. It is a signal of the global tensions crisscrossing the working places and of the need to overcome the traditional divisions among professions and the idea that real gains for workers can be obtained in single places or in a single industry.

Now also the International Dockworkers Council (IDC) calls for global support. This week solidarity actions have been made in several cities; from Queensland in Australia to Zeebrugge in Belgium and Koper in Slovenia. As TSS we stand in full solidarity with the striking workers and we urge to consider that ports are key for global production chains and financial markets. Dockworkers receive strong pressures to perform just-in-time labour intensive tasks, while often enjoying a greater leverage if compared with other workers. While we support the dockworkers’ strikes in Gothenburg, we also think that in order to gain a real power for all workers, solidarity should help to consolidate a transnational infrastructure that turns the connections between the different local and social conditions of labour into something visible and recognizable. With the goal to produce a real social enlargement of labour struggles and to fight back in a wider context.