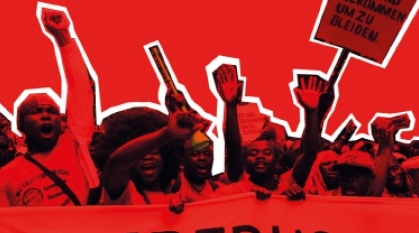 Speaking of migrants today in Europe means mainly speaking about the «refugees question». In front of the growing mass of migrants that are forcing European borders, migrant labour as a political question seems to have disappeared. Recognizing this dynamic as our political problem, the workshop has been organized in order to rethink and recast the political centrality of migrant labour in front of the transformations taking place in the general process of precarization of labour and in the government of its mobility. Against this backdrop, we agreed that welcoming initiatives in favor of incoming migrants and solidarity actions are not enough to fight against the mobility regime because they reproduce separation between migrants and non migrants, workers and asylum seekers and between the «refugees question» and the general process of precarization and impoverishment of labour. Governing the mobility of migrants is one of the main leverage of the general process of fragmentation and isolation of labour today. Understanding the way in which this happens has been the first objective of the workshop in order to see which discourses, which strategies, which possible tools of action, organization and communication we can build.

In the first part of the workshop we discussed the political conditions of exploitation of migrant labor and its link to both precarious labor and the process of dismantlement of universalistic welfare regimes. Recent welfare reforms in Europe are all going in the direction to reduce and discriminate the access to welfare services creating hierarchies among workers, fragmentation and isolation. Residence permit, asylum and other various forms of international protection are becoming harder and harder to obtain, both thanks to new European Union’s directives and national laws. This creates an heterogeneous situation that nonetheless shows similar trends. If in Italy institutional racism is by now well established and it is now used to manage and exploit migrant labor and refugees, in Sweden migration reforms are being currently transformed with effect on both new comers and old generation of migrants: in each case, the common trend is that the legal permanence of migrant is becoming more and more provisional and functional to the general process of precarization. In that way, the link between labor and citizenship produces precarity among migrants and makes it hard for them also to find a house to live. Slovenia has seen already in the past big migrations movements coming from the East and now the Balkan corridor has opened a new situation where government provides different laws for different kinds of migration as for border control, producing divisions, chauvinism and spreading fear. The integration reform in Germany and the so called Brexit are creating new internal borders and are trying to turn migration movements into a temporary possibility of exploitation. This results also in a political stratification and fragmentation of migrant labour itself, that overlaps with its political isolation continuously reproduced by daily institutional racism: different legal status of protection, different criteria of access to welfare (between citizen, Eu migrant, non Eu migrant, refugees), different regulations of the resident permit. We are thus facing similar processes of intensification of exploitation in all Europe, but also continuous transformations of its political conditions that require new instruments of political communication. Since the precarization of welfare and labor and their wider effects outside the workplaces is affecting both migrants, internal and external, refugees and precarious, we agreed that the only way to organize a powerful answer is to create connections and communication between migrant labor struggles and other struggles, in order to interrupt the isolation and fragmentation produced by precarity and mobility regime.

In this direction, we discussed the political meaning to claim a European residence permit, specifying that this has to be used as a tool to link and give resonance to the struggles and not as a demand to be asked to European institutions. To claim a European residence permit should aim at recognizing a collective plan of political action, it should be the expression and the manifestation of the power of all migrants crossing Europe, in order to fight not only against borders control, or law wages or bad contracts and policies, but against the whole system sustaining this transnational exploitation. We agreed then that in order to be effective, this political tool has to be kept together with other crucial issues such as European wage and welfare to combine and connect the various migrant realities and «worlds» and to keep together different kind of claims, conditions and figures of precarized labour. In addition, by highlighting the political conditions of exploitation, the perspective of migrant labour allows us to «socialize» and «transnationalize» the existing struggles, showing the political ties that link the intensification of exploitation in the workplaces to the general precarization of the life conditions.

In the second part of the workshop we discussed how to realize this discourse into a set of practices and communication tools that can allow us to bring the TSS perspective into our local struggles and to show their transnational character. We agreed that, to this end, claims should be the pillars of our local initiative in order to connect struggles across border, to give political meaning to strikes occurring around Europe and to build a common political vision with migrants and workers, inside and outside workplaces. We also discussed to propose and test common tools to give continuity to our communication and to enlarge the possibilities of our action. A first idea is to establish a subsection in our website with a concrete mapping of different struggles and conflicts occurring in Europe, in order to share and let circulate experiences and information that can be useful to individuate key sectors or cases to be connected. It should also include a map of counseling points and offices for migrant labour. This will be done by creating an editorial team to take the responsibility to the organization of the editorial work. Secondly, to foster communication among the participants and to involve other people, it was underlined the necessity to find other moments of discussion, such as a summer school or mutual visits both among activists and workers on a transnational scale.