France on Strike Again: The Chance of a Transnational Movement? 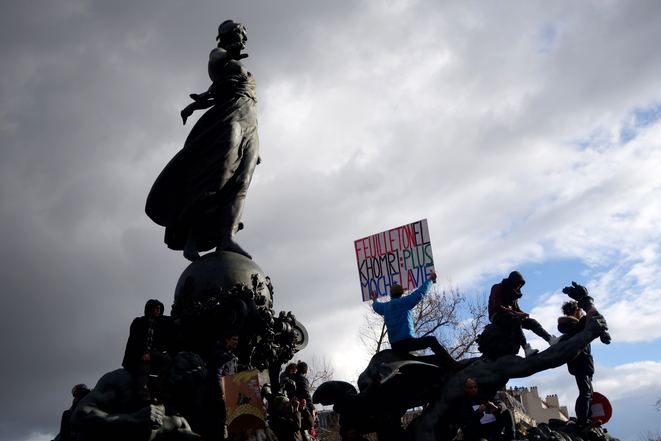 On Saturday, April 9th, that is on March the 40th according to the new calendar of the protest, more than 150.000 people demonstrated in Paris and more than 200 demonstrations took place all over France, showing that the mobilization against the project «loi travail» it still vibrant. The Parisian mobilization has been very powerful and has involved not only activists but many sectors of wage labor, students and high school students as well as the entertainment workers. After more than one month of ongoing demonstrations, something totally new happened: very provocative police forces in Paris, in Place de la Nation, charged the demonstrators while they were arriving at the end of the march. The same evening, the Place de la Republique was stuffed up with lots and lots of people, clearly showing that «Nuit Debout» is effectively establishing a connection between students, employees, private sector workers, common citizens, LGBT and feminist activists, migrants and pensioners.

In France the movement against the «loi travail» is growing rapidly and it is involving the precarious workers of today and those of tomorrow. The government is trying to further precarize the labour market to attract foreign investments and please the employers. The fight back is engaging workers in different conditions – precarious, students and migrants – opening up a space for political organization that goes beyond the refusal of a single law. The strike – its possibilities, its conditions and its political meaning – is at the center of the discussion. From the perspective of the Transnational Social Strike process, what is happening in France can be seen as a step in the right direction. With this intervention, we want to stress what is relevant in the French mobilization and its transnational significance. The French «loi travail», in fact, resembles other instruments of precarization pushed under the agenda of European austerity and its normalization, and it fits in a cross-border reorganization of labour that requires a new level of workers’ organization. It is time for us to bring the challenge a step further.

The 31st of March 2016 more than 200 demonstrations were organized throughout the country against the «loi travail». The mobilisation was called by trade unions – CGT (Confédération Générale du Travail), FO (Force Ouvrière), FSU (Fédération Syndicale Unitaire, public sector, especially teachers), Union Syndicale Solidaires – and high school and university students’ organizations – UNEF (Union Nationale des Étudiants de France), Solidaires Etudiants, FIDL (Fédération Indépendante et Démocratique Lycéenne) et UNL (Union Nationale Lycéenne). On March 9th we could feel that «something» was happening, but with 1.2 million people mobilized on the 31st, the double of the previous mobilizations, now we can see that the movement is growing up fast and that the mobilization goes beyond the usual circles of activists. For example, organizations and collectives of unemployed and precarious workers are very active. General meetings and briefings have been organized inside the universities and assemblies of strikers and militants with young people, workers and unemployed have been held inside the Bourses du Travail. The online petition «Loi travail non merci» has been signed by more than one million people and the website «On vaut mieux que ça» promoted by younger activists has been pivotal, while the call «Bloquons tout» takes positions on the generalization of the strike and was signed by unions members of CGT, CNT (Confédération Nationale du Travail, anarcho-syndicalists) and Union Syndicale Solidaires.

During the demonstrations, people shouted against the labor law, but also for the reorganization of working time, claiming a 32-hours week (currently the statutory working time consists of 35 hours per week but the real working time of employees in France amounts to around 38 hours per week). People protested also against the neoliberal policies of social destruction and for the redistribution of wealth. The movement in the squares is born through the initiative of «Nuit Debout» in Montpellier, Rennes, Lyon and Paris, where in Place de la Republique since the evening of the 31st of March different initiatives are taking place: assemblies, gatherings and meetings put together several thousands of young and old, «organized» and «unorganized» people, showing a real need of discussion and debate around social and labour issues, around the governmental policies and around the possibility of a general strike. After this rapid development, now we don’t know the future of this movement, which form and which kind of actions it will take, since the movement is building itself day by day. But it is clear that the way in which this movement will reply to the above mentioned questions will be of great significance even beyond the borders of France. What is at stake today in France is precisely how to organize and struggle in times of extreme precarization. Furthermore, even if it still remains in the background, what the movement in France is facing is not just a national problem, but it is the result of a new European government of mobility based on more and more intense precarization, wage cuts, welfare restrictions, workfare and a very harsh labour discipline.

The government is now attempting to call a halt to the demonstrations by dividing the movement. As a matter of fact, Manuel Valls has called the leaders of student organizations with the aim of stopping the protests in the universities. But until today we can see that the Inter Unions alliance with youth organizations is growing stronger and stronger. Thus, more demonstrations, namely the ones on the 5th and 9th of April, have added up to the already dense story of the contestation of the labour reform. Furthermore, a new front of social protests seems to be coming up and it concerns the sector of show business. Indeed, the government stated that «additional efforts» will be required from intermittent employees of this sector during the periods of unemployement. In the evening of the 4th of April, a general meeting called by CGT Spectacle and the Coordination des Intermittents et Précaires (CIP) collected several thousands of people at Théâtre de la Colline in Paris. What is more, different calls out to join the events of the 9th of April have been circulated in the past days. It is a convergence between the youth, workers, private employees and intermittent workers that is under construction. A convergence on the «social question» and the possibilities of strike today, with some other good news: the Front National politicians, the right party whose latest successes are based on social fear of refugees and migrants, have been silent for at least one month. The silence of nationalists is to be combined with our will to break the national and state divisions in order to upscale the fight against precarization at the transnational scale. The mobilisation is still under construction, though… It is just the beginning.

While a link has been established between various figures of labor in France, it is also true that a transnational connection in terms of claims is still largely absent. European employees are undergoing a process of mass precarization. This process is based on the exploitation of differences in social and labour rights between States and results in laws that promote a real border regime and the government of mobility. Among the purposes of the «loi travail» there is, on the one hand, the adaptation to the rules in force in the transnational space, the space where many private companies work. On the other hand, this law is meant to justify massive 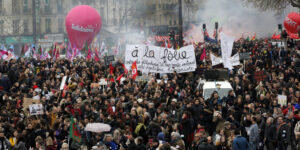 layoffs while the only thing that matters is the «health-condition of the company at national level rather than at the international level» (see the case of the German company Continental at Clairoix in France). It is already evident that the only actors that will gain from the labour reform are the transnational companies that are depicting themselves as trustable, while they are just serving their own needs. The «loi travail» will favour the companies that built their capital drawing on the relocation of the production and on wage and rights differences between States. So it is also transnationally that we need to build an opposition to all these kind of law and establish a discourse against them. The challenge does not arise on at national level, because transnational exploitation chains are globally developed. It is in this framework that the project to build a process towards a transnational strike has its relevance. As our first goal, then, is to produce a discourse that unveils these transnational exploitation projects. How? Building a common discourse summarising the claims of the social movements of each State is not enough anymore. Instead, we should try to seek a common process and raise transnational claims in order to fight against the mechanisms of transnational exploitation played through the mobility of workers, capitals and production sites, as in the case of IBM.

At the same time, the longstanding need to govern migration in Europe, dividing internal and external migrants, those who get social benefits and those who do not, is only outwardly detached from what we have stated above. For this reason the weakness of migrants’ struggles in the context of what is happening in Paris is somehow a practical translation of the result of this government for mobility. Current divisions cause a situation of extreme exploitability for a wide range of workers beyond occupational categories. Migrants’ condition is crucial in order to understand the attack against workers. To contest the government of migrations and mobility across and within the States is thus central in the process toward a general strike. If the more exploitable workers are not included in this fight, we miss our goal of destroying the infrastructures of this precarity that weaken us all.

Indeed, the challenge for a transnational political process as Transnational Social Strike is to connect the movement in France with the conditions of millions of precarious workers, migrants and students across Europe. How to make common claims – such as a European minimum wage, a European welfare and income, a European visa for all migrants – resonate from the squares in France to the factories on the other side of the continent? How to build commonalities across borders? How can these claims help building a transnational movement?