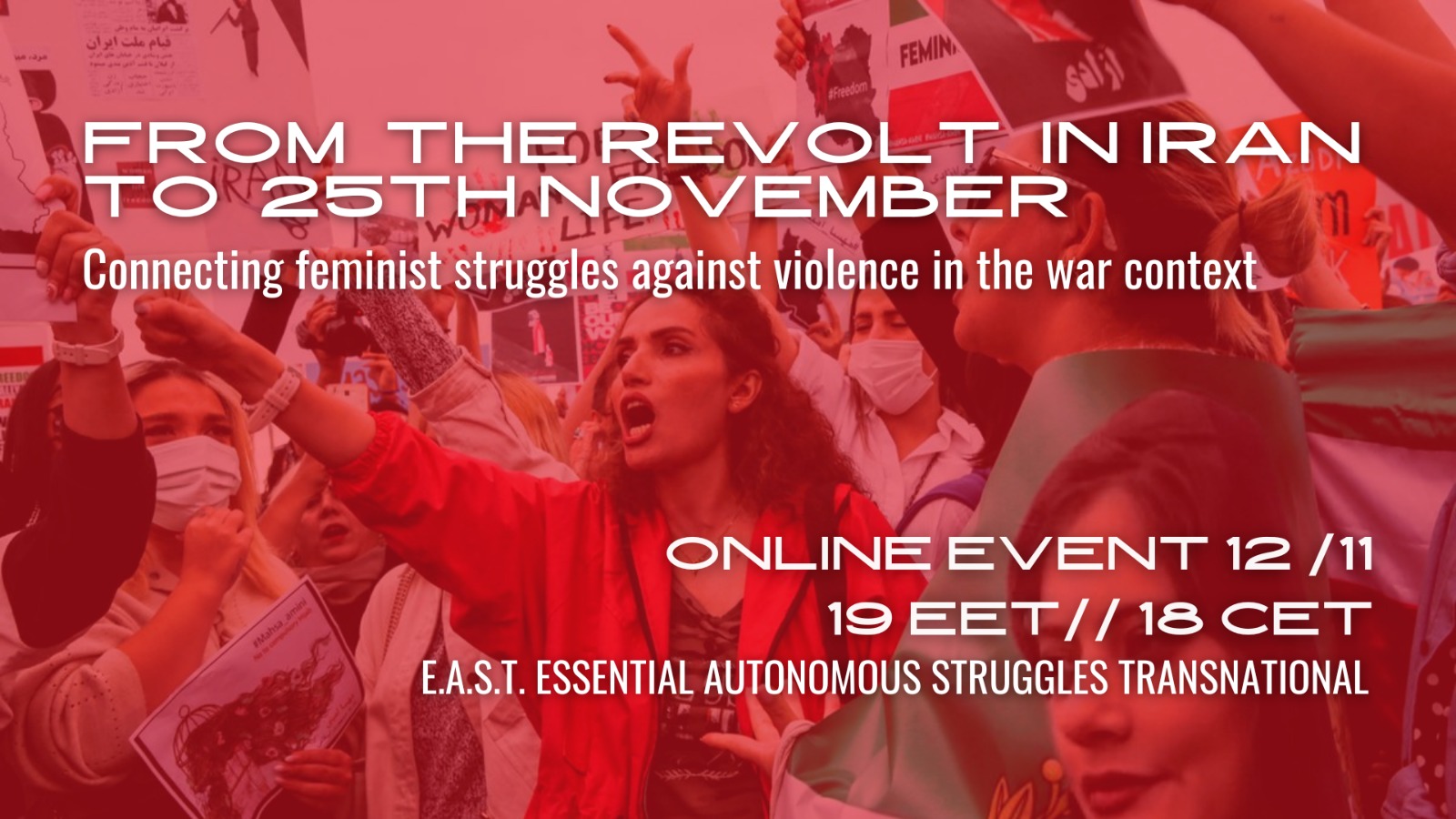 On November 12th EAST calls for a public online event on feminist mobilizations against state and patriarchal violence: from Iran to Ukraine and beyond. The public discussion is a step on the way to a common transnational feminist initiative on November 25th – International day for the elimination of violence against women.

After several weeks, the revolt in Iran is still upturning the whole country. The murder of the Kurdish-Iranian woman Jîna Mahsa Amini, while she was detained by the morality police, called thousands of women to take to the streets against yet another demonstration of patriarchal violence by the state. Amid an economic crisis and repressive policies worsened by the increased militarization, the removal of the headscarf turned into a symbol of a generalized struggle against the Iranian authoritarian and theocratic regime that oppresses women and exploits all. This revolt shows that women are not silent in the face of a patriarchal attack against their lives and freedoms. As Amini was of Kurdish background, the current uprising in Iran has been connected by many to the Kurdish liberation movement and the centrality of women for the Kurdish revolution. Kurdish people have been struggling for decades against state repressions, massacres, and wars issued against them by different states, most recently by Erdogan’s regime. The powerful message of the Iranian revolts “Jin-Jiyan-Azadi: Women, life, freedom” – originally coined by Kurdish women – is a symbol of the connections between these struggles and resonated well beyond Iran, inspiring feminist protests in solidarity all over the world.

In the same time, patriarchal and state violence against women and LGBTQI+ people is unfolding in its most brutal ways in the ongoing Russian war against Ukraine and its effects are felt well beyond the Eastern European region. Rape is used as a war weapon in Ukraine and women’s bodies are turned into battlegrounds. The war reinforces the most patriarchal norms of women being ‘mothers of the nation’ and men – the armed ‘defenders of the nation’. As we discussed during our transnational meeting in Sofia in September, the Russian war against Ukraine is emerging as a process that globally reaffirms the family and tradition in order to support the sexist division of labor and ensure that women continue to bear the burden of the militarization of economic policies. We firmly stand with women and LGBTQIA+ people fighting for their lives either staying in Ukraine and defending themselves or trying to seek refuge elsewhere. Still, we cannot ignore how European governments are now legitimized in the global realignment of war politics and are making workers, women, and migrants pay the price of the war with the growing cost of living and with the energy and environmental crisis. Thus, with this event, we want to showcase the different faces of patriarchal and state violence in Iran, Ukraine, and beyond and explore to what extent there are connections between the struggles of women and LGBTQIA+ people in these separate contexts.

How are the patriarchal regimes in Iran and Russia supporting each other and how can we confront them? What can we learn from the Iranian revolt to develop new ways of solidarity against the state and patriarchal violence? How can we collectively organize in our contexts and transnationally to fight against violence in the current scenario marked by the Russian war against Ukraine? And finally: we want to see how the struggles of women in Iran have the potential to inspire a transnational feminist initiative for November 25th and beyond, that links the refusal of state and patriarchal violence to the refusal of war.

We will discuss with activists from Iran and Kurdistan. More info soon.

The event will be livestreamed. A Zoom link will be available soon!