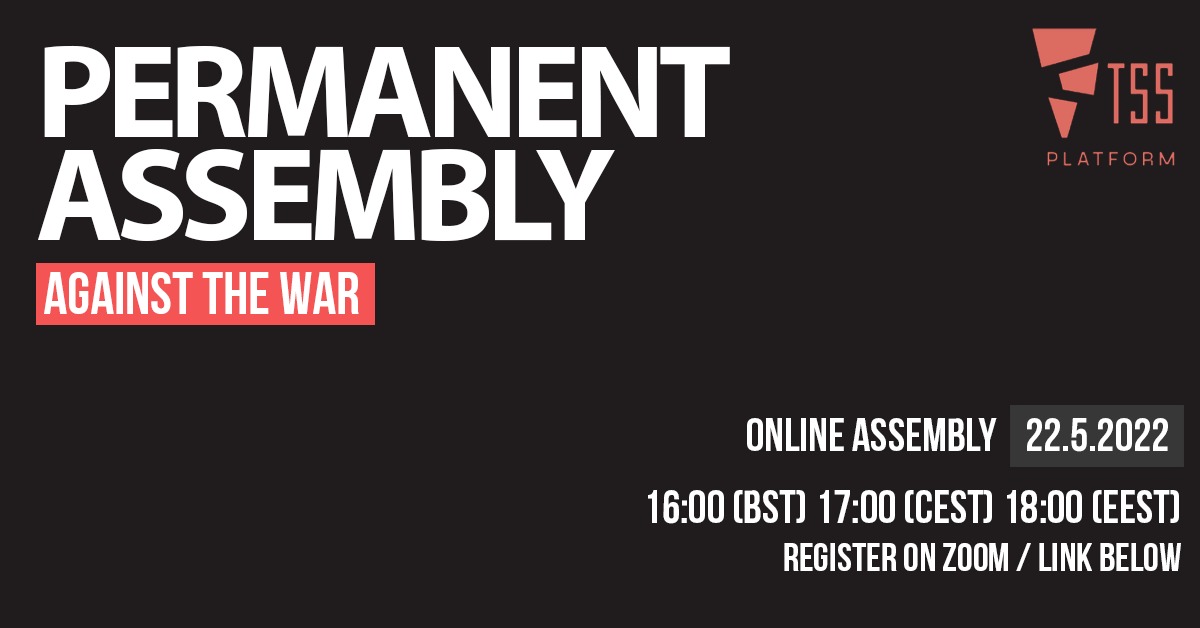 In a situation of extreme fragmentation and general difficulty generated by the violence of war, the Permanent Assembly against the War called for a clear signal against war, oppression and exploitation on the past 1st of May. Responding to this call, collectives and activists from several countries, in connection with the Feminist Anti-War Movement in Russia, decided to simultaneously “Strike the war” and manifested a transnational capacity to bridge the fronts of war and the borders of nations, to stand on the side of workers, migrants, women and Lgtbqi+ people that are resisting the war and fighting to survive. Following the lead of this important moment of transnational connection, we call for another anti-war meeting on May 22nd 2022.

As the military aggression on Ukraine continues, the perspectives of a truce, let alone of a peace agreement, are fading away and actively excluded by those interested in the continuation of the war. One thing is clear by now: the war in and around Ukraine is part of a world conflict and of a far-reaching global realignment. That this happens when nuclear weapons are proliferating shows that this new clash of powers knows no boundaries. A new international order is in the making and we need to get ready and build a transnational response: our lives, our working conditions, the very possibilities of fighting for social justice are at stake. Global elites imagine a future where the wellbeing of states and capital, advanced at gunpoint, overshadows any possibility of radical transformation and we need to refuse to be passive tokens strangled between the restructuring of the Atlantic pact, Putin’s regime and the ambitions of Xi’s China.

The effects of the world war will not be the same everywhere. There are those who are killed and wounded. There are those who are suffering dramatic changes, as in Central and Eastern Europe and Central Asia. There are many people and migrants coming from war zones to whom the war is no novelty. What is certain though is that through the war the overall conditions of production and reproduction are reshuffled and restored at our expenses.

Money is diverted to buy weapons and away from public services; production in many countries is entering war mode and workers are pushed to contribute by putting aside their claims; rising energy and living costs are making wages and remittances poorer; instability in food supply threatens the livelihood of millions of people. Industrial policies are dismissing green conversion and following only the mantra of war preparation. While they are at the front of the resistance to the war, women are victimized or depicted just as mothers, sisters and wives of Ukrainian men fighting, and those who left Ukraine are already exploited as cheap labor. The arrival of refugees from Ukraine is used everywhere to worsen the conditions of non-EU migrants and establish new racist hierarchies.

Our opposition to this war and the solidarity with people in Ukraine under shelling and all those suffering the horrors flowing from the conflict need to go hand in hand with a long-lasting and transnational politics of peace within and against the changing world war scenario. The Permanent Assembly against the War is the space where to build a collective process autonomously from the politics of states and nations; to refuse to fight for peace only at the cost of more war and more militarization; to refuse the current mantra according to which war and more war are necessary to defend “European values” and democracy.

A transnational politics of peace is not only about the end of hostilities now but is a partisan and practical task we can endorse and fight for. To strengthen this partisan task, we need to enlarge the communication across the borders between those struggling to oppose exploitation and oppression that the war is exacerbating, in Europe and beyond. With this goal, we invite all those who want to take part in this process to the next meeting that will take place on May 22nd at 5pm (CEST) to discuss together how to build a transnational politics of peace, for the present and for the times to come.